Congratulations to 17 year old magician, Joel Howlett, who was declared 'Young Citizen of The Year' in the City of Lake Macquarie Australia Day Awards. You can read the full story here.

As most of the readers of this blog are either magicians or magic fans, I'm sure you all have photos of yourselves with playing cards. 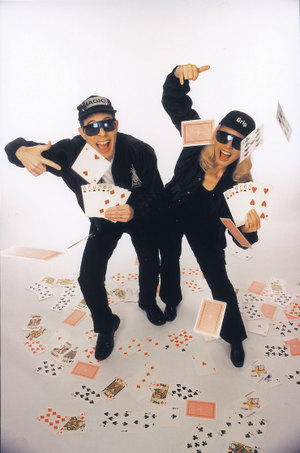 Well TheCuso has just embarked on a photo competition and is looking for exactly that! 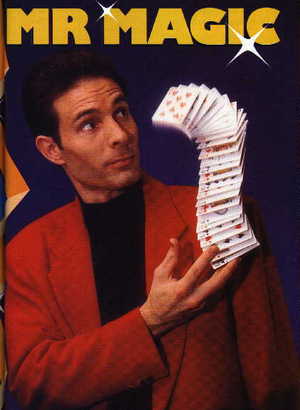 These are the rules:

-Only one pic per participant.
-The pic must contain at least a playing card or a deck of cards or anything related to playing cards (symbols, court guys running around or whatever).
-Only submisions to thecuso@gmail.com with the subject My Photo will be allowed for the contest.
-Emails must include your full name and nickname/screen name (if you have).
-Deadline is 29 February 2008.

There will also be runner ups for these categories:

Funniest pic: If you think you have THE pic that would make us laugh our asses out.
Most Artistic: If your pic has the best colours, lights or photoshop effects.
Most Original: If you did Pandora while jumping off a bridge bungee style. 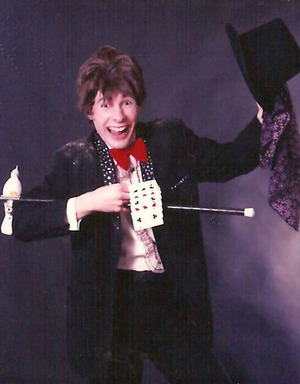 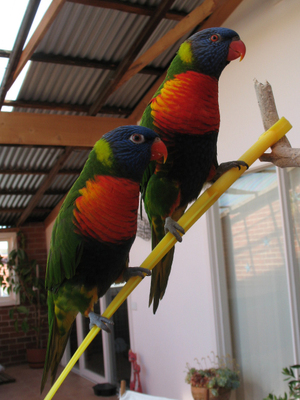 We now have two Rainbow Lorikeets. Jackie Bandit joined Sparks a few weeks ago and, after the initial battles to see who would be the dominant bird, they've become inseperable friends. Jackie is much smaller than Sparks (though he doesn't look it in the photo) and a few months younger, but when he arrived he definitely gave Sparks a run for his money. They spend hours rolling around the house having wrestling matches and teaches each other new calls and whistles. Bandit's also taught Sparks how to hop so he doesn't have to walk backwards anymore. We've put a photo album on our Facebook page here for those who are really interested.

The Next Uri Geller - Clips

Here are some clips from the German TV show THE NEXT URI GELLER. It helps if you understand German, but it's not essential:

HAYASHI WITH A SMASH & STAB

Sorry that some of the clips seem short, (and that Hayashi's is disturbingly out of sync) but despite the hundreds of clips posted on YouTube of this show, it's VERY hard to find any that DON'T have explanations superimposed by the posters. Everyone seems to want to expose the magicians to prove "it's not really magic, just tricks!". (For example, with Hayashi's tricks, posters are explaining not just the correct name of the effect, but where you can buy it online).

As Thomas Fraps said "This is the price you pay if you claim to have supernatural powers in the internet age ;-)"

I guess this acts as a warning for those who want to do magic on TV, you better make up your own stuff and make sure it's absolutely impossible to figure out.

We mentioned this six-episode series (where seven celebrities are taught magic by professional magicians) ages ago but, according to the ELLUSIONIST BLOG, it's now officially going ahead. It was shot last year at The Magic Castle some time ago (and made headlines when one of the female magic coaches was accosted in her hotel room) but VH1 are now going to air it.

Max Maven and Jeff McBride will judge the celebrities on their performances (though actor/magician Jonathon Levit is apparently also judging as well as hosting the show) and, we expect, each week one will "vanish" from the competition.

As far as who the celebrities go, don't expect Tom Hanks or Oprah Winfrey, it looks like they are all musicians (which makes sense as VH1 is a music channel) and include singer Carnie Wilson (from the group Wilson Philips), singer/actor/comedian Hal Sparks, rapper/comedian Chris Kid Reid, and Kim Wyatt of The Pussycat Dolls. (I said "Who?" too). In her blog entry from Sep last year she said:

"Lately I’ve been putting all my time & energy into a new VH1 show that will be airing in January. It’s called ‘Celebracadabra’…haha. Hilarious name & its premise is MAGIC! Who doesn’t love magic!? I never knew how hard & how much brain & body power it takes to pull off a trick. But I’m having a blast!"

The magic coaches include David Regal, Murray Sawchuck, Franz Harary, and Rocco (who has his own Celebracadabra video channel on MySpace, and talks about starring in the show on his MySpace page. Tennessee magician Michael Keating says, in this article, he was a consultant on the show (though he may have been assisting Franz Harary). Mark Cannon is also credited as an "Escape Consultant". Jennifer Adams was involved as a magic coach, but had to pull out back in September.

The show, and it's $100,000 fiirst prize, is sponsored by Ellusionist. They'll also offer downloadable magic tricks to viewers at home throughout the series. While this will undoubtedly give Ellusionist a boost and ensure that magic tricks are owned by more people in America than ever before, will this help or hurt magic? The show airs in the USA in March, so time will tell.

You can get all the latest news on the show, and exclusive "backstage" clips, at the Ellusionist Blog, and Genii Magazine will feature the show in their February issue.

We saw Cloverfield today. It's JJ Abram's (he of 'Lost' fame) take on the classic "Monster Movie" genre. It's a very effective piece of story telling and the special effects are astonishing, however be warned: If you suffer from motion-sickness STAY AWAY! It's filmed in the 'Blair Witch' hand-held home-video style... and  90 minutes of jerking and jarring on the big screen can be just a little too much for many people.

Was this choice of single-camera cinematography wise? It certainly made the whole thing more realistic, but less epic. The special effects were more convincing, but harder to watch.

To be honest, I think if they made two versions of this film, one hand-held and the other standard Hollywood format, the latter would make a killing on the box office.

Take a look if you dare, it may not scare you, but it may make you sick!

Having run a few Festivals of Magic in the distant past... I must tip my hat to the organisers of SHOWZAM! Blackpool's festival of circus, magic and new variety. Take a look at their very slick website here, and the line-up on their show 'Probably The World's Greatest Magic Show' says to me that it may well live up to it's title!

Steve Pellegrino, he of MagiCentric fame? As we mentioned a while back, he is now running the Ellusionist blog but, as of today, he is back with his own blog PURSUIT OF MAGIC. We wish him well!