Justin Robert Young over at iTricks.com picked up on the Sight Magazine story about Ellis & Webster and was especially intrigued by Sue-Anne's comments about straitjackets and chainsaws.

Justin asks his magician readers for their favourite "odd moments".

To learn more and send in your own CLICK HERE

The best restaurant magician ever

Lawrence Leung's Choose Your Own Adventure

Conratulations to Lawrence Leung who, as was announced last week, has started filming his own 6 part ABCTV series 'Lawrence Leung's Choose Your Own Adventure'.

Magicians will know Lawrence from his solo show 'Sucker', which explored cons, scams and magic tricks, and from his hilarious fake lecture on 'The Double Lift' he created and presented at the 2004 Australian Magic Convention.

Lawrence has also performed several other festival shows including 'Skeptic', 'The Marvellous Misadventures of Puzzle Boy', and 'Lawrence Leung Learns to Breakdance' (which recently won 'Best Local Performer' at the Cracker Comedy Festival). He's also been a regular on 'In Serbia Tonight' and appeared on 'The Chaser' (who are producing his new TV series).

We're featured in today's issue of the online SIGHT magazine. The article, 'A magical life: behind the curtain with illusionists Tim Ellis & Sue-Anne Webster' can be read by clicking here.

This week's clip from the deranged collection of Jay Sankey

I've been having issues with my mobile phone (haven't we all) but I thought you might be amused by the telecommunication industry's concept of time.

I'm sure you're all familiar with trying to phone Optus or Telstra and the ironic "Your call is important to us" message they play repeatedly during the 30-40 minutes it takes before you get to speak to a "real" person (who then promptly quizzes you to ascertain that it "really is you" before putting you on hold in order for you to get quizzed again by the next person).

Anyway, a few weeks ago I'd had enough of one particular Telechoice store and I tried to lodge a complaint with head office. After a few days I was given the phone number, and on calling I was told I had to email the complaint in writing. I did that. But the email kept bouncing back.

The receptionist, who was very helpful, explained they'd been having trouble with their email and gave me her private email address with assurance she'd pass it on to the relevant person.

Thank you for you email.

I have passed this onto David Rochford who is the state manager for . He will be in contact within two business working days to discuss with you and to help resolve the situation.

By May 17 I emailed her letting her know David had not contacted me... and so it has gone on every two days ever since. In all fairness though, perhaps David Rochford, being a State Manager, only works every now and then... maybe he's only had one working day since May 13.

Ah, life must be wonderful in the crystal coated fantasy land where money falls from the trees with no effort reqiured that is the world of Telecommunication.

(By the way, my HTC Touch phone is STILL broken and I'm still waiting a quote on how much it will cost to get it repaired. Today marks DAY 60 since it broke).

Here is another Telechoice Tale, and one more to prove I'm not the only one this sort of thing happens to.

The show I did on Wednesday night was another one of those 'Special Orders'. It was for a conference dinner of Department of Education heads at Aitken Hill and, just to make things a little interesting, my brief was to appear as the guest speaker: Dale Robbins, a teacher who'd been over the the Andre Agassi Academy in Las Vegas and was going to present a report on my trip.

Other than researching the Academy (which is actually real) the only other info I went in armed with was that I was an English teacher at Ivanhoe Grammar School.

As I was introduced to several of the top brass over cocktails the first question I was asked was:

"What school were you at before Ivanhoe?"

No room for hesitation here or I'd be dead before I began.

"Braybrook" was the first word that came to my head, and sure enough, just like in all good sitcoms...

"Really? Who was principal when you were there?"

After what seemed like 5 hours but was actually less than a second... I replied.

For the next hour I chatted about all things educational and regaled them with stories of my adventures in teaching. I even met someone who had friends in administration at Ivanhoe Grammar and we swapped stories...

Finally entree was over and I got up to speak about the Academy, which I did before slowly moving into some "exercises" we were taught and finally a toast. After I produced the can of Pepsi from my shoe most people had caught on to the fact I was not a teacher...(though I thought they'd catch on at the beginning when I said "A child's brain is like an orange, you peel back the skin to reveal the zest").

Surprisingly, they were not annoyed or embarrassed when it was revealed who I really was, but congratulated me saying the first hour of chat was even more amazing than the show!

But there was more to come and after main course I hopped up and gave them a full comedy and magic presentation which was customised to feature each of the General Managers.

It was an extremely challenging gig to prepare for, but extremely satisfying once it was over. (And it was an absolute roller coaster ride in between!)

Petrol at a premium 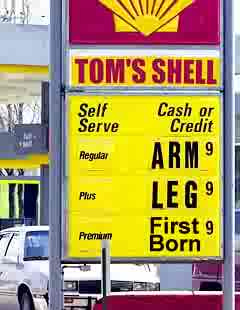 On the way to the show last night I needed to stop and fill up the van or there was no way I'd make it.

I almost gasped when I saw the next station a minute down the road. It was $1.62.9, but what was even more amazing was the station opposite was charging $1.39.9 - that 23c per litre cheaper!

And why the price hik? According to the paper today, the price of petrol in Singapore reached a record high and, for some reason Australia uses that as a benchmark. So though the petrol in the reserves of the stations in Bell St had already been paid for, the profit margin increased massively!

Mat Unwin put us on to this one: