"Please take your seats and enjoy the show"

Last night's show was in Hobart, Tasmania, for Cadbury Schweppes, and it went down exceptionally well. Part of the reason was the set-up of the room. They'd organised a stage, lit it well, made sure all the tables could see well, and they had a good sound set up. They waited until the main courses were cleared and all the attention was focussed on the stage and from the moment Sue-Anne levitated on the microphone stand to the unscheduled encore, we had the entire room's full attention. (I even finally figured out a presentation for the ladder from briefcase that actually worked!)

Tonight though... there's a legendary story about a Melbourne magician who was hired to work one of the toughest discos, the Bombay Rock, and when it came time to perform he got the management to turn all the lights on, the musioc off, and sit the audience down on the dance floor before he began his show.

As soon as I walked in I felt like I was about to experience that myself...

It was a football club's gala night and, to give them full credit, they had a stage, sound system, some lights, and the even put four rows of chairs out on the dancefloor. But they were up against it from the beginning. The room was a cavernous, L-shaped, concrete band room filled with about 400 people. All standing.

Not just standing, drinking and talking, but crammed together like sardines as well.

So, when it came time for me to perform, the compere got up on stage and tried to get everyone's attention. I was standing beside the stage and I couldn't hear him through the PA over the general hubbub of conversation.

Some people came forward and sat in the chairs, obviously aware the show was about to begin and eager to see it (thank goodness!) But it wasn't until the compere started shouting into the microphone that he was able to get the attention of even a small part of the crowd.

So I just had to grit my teeth and go on almost as though it was a street show in the middle of a busy intersection.

Every piece of non-essential patter was dropped, and I put extra emphasis of the visual effects. Things like the appearing candle and the $5 bill changing into the $10 bill got great reactions, but most of the gags that went down a treat last night couldn't really be heard clearly even by the front row.

The key for me was to have an audience volunteer on stage with me at all times. That was I was able to keep an immediate connection with the group. I really needed that. I relied on the reactions of the volunteer to know how I was going because I couldn't hear the seated audience above the chatter of the standing audience.

In the end, I got a lot of people coming up to me saying they loved it and commenting on specific effects. I was very surprised they'd even been able to follow the tricks given the nature of the room.

The client was pleased, which is the most important thing, but I can't help thinking strolling magic would have been much more suitable for a set up like that.

Why book a show when you know at least 60% of your audience won't possibly be able to see it?

On the other hand, Sue-Anne was doing a show for a much more sedate group at a 40th birthday event tonight. They were all seated at tables but they arranged them so every table had an unobstructed view.

Vote for Scott Davies on AGT 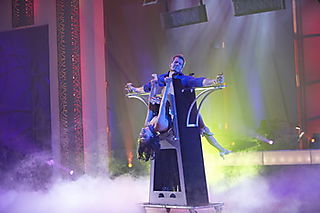 Last week I did a show for the Department of Treasury. They were on a retreat and I was engaged, secretly, as a guest speaker. What no-one in attendance knew was that I was a magician, they were all told I was Dr Francis Roberts PhD, used to work for McKinsey Consulting and was now there to speak about Business Realationship Managing.

As usual, the hardest part for me was chatting to the group one-on-one during cocktails. Difficult on one level because socialising in general is very, very stressful for an Aspie. Difficult on another level because I had to pass myself off as someone I wasn't. This was made extra hard because many of the people I spoke to knew a whole lot more about "my field of expertise" than I did.

I was able to pull off one amusing story with great conviction I thought I'd relate to you.

I explained that, since I'd left McKinsey and formed my own company, one of my regular clients was Telstra. They'd come to me with the problem that they were losing $3m annually having to answer customer calls about their mobile phone services when most of the problems the customers were calling about could be solved easily with a "Did you turn your phone on?"

In other words, customers were wasting Telstra's time and money.

I offered several suggestions but the one they chose to go with was this: We discovered that people were willing to wait on hold for up to 25 minutes. By forcing them to stay on for 30 minutes, most people simply gave up and sorted out their problems themselves. Thus taking the pressure off Telstra and enabling them to hire fewer staff.

In the end, the idea saved Telstra almost $5m.

The guests at the function were shocked that I had offered such a solution to Telstra, but not surprised that Telstra jumped at it.

The One - A TV Phenomenon

We've been wondering when Channel Nine was going to get the ball rolling for the local version of 'Phenomenon', but it looks like Channel Seven has beaten them to the punch with their own version of the show without Uri Geller.

'The One', hosted by Andrew Daddo, will go to air on Seven next month as they search for "Australia's Most Gifted Psychic". Richaurd Saunders of the Skeptics is on the judging panel, but how sceptical will they really be? After all, anyone who doesn't believe in psychics won't be watching the show so to debunk the very people you're searching for wouldn't be a good ratings move.

Take a look at the official press release (and a few candid comments) here.

Ellis & Webster are the cover story on this week's'War Cry'. The June 21 issue of the Salvation Army's weekly colour magazine also features a three page story with some great pictures.

We'll give you a link to the article when it appears online, or you can grab a copy from your local Salvo's this Sunday, or subscribe here.

A packed house at 303 High St Northcote enjoyed a diverse collection of some of Melbourne's strangest acts.

The night kicked off at 7.30pm at with Nicholas J Johnson warming the audience up with some great comedy before introducing DJ and Christy Shelper, the world's only fork-throwing act. No gimmicks, just real forks and real danger. Where else can you see an act like that? 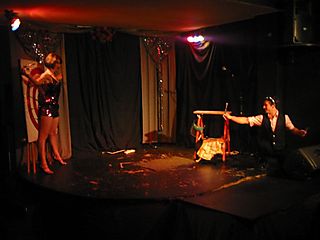 Chris Morant was up next with a frenetic display of juggling and balancing with hats, cups and canes, and he was followed, oddly enough, by pikelet cooking... (you had to be there). Comedian Michael Connell closed act 1 with a set of very original comedy. I loved his take on having a work-experience comedian.

Act 2 began with me, Tim Ellis, doing razorblade eating, and enhancing the effect with live video and a big screen. This really helped the next trick as well as I sliced my finger with a stanley knife. I wrapped up my set with 'Insanity', Russian Roulette with a broken beer bottle. (I love that trick!) 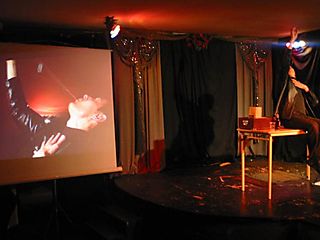 Nicholas returned and re-introduced Chris Morant who gave a dazzling display of whip-cracking, and glammed up the act with a sexy apron for his volunteer. Nicholas challenged the audience to a game of poker, and won with six of a kind, and then introduced the musical act of the night, The Melbourne Ukulele Kollective. Eleven ukelelists playing classic tunes like '5 foot 2' and 'You Are My Sunshine' mixed up with tunes by The Kinks and Elvis Presley. 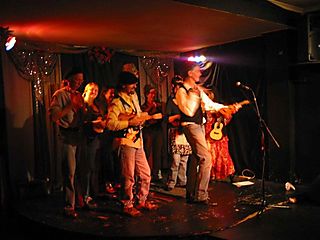 That brought the night to a reluctant close, but fear not, the Catch Penny Club returns to 303 on July 27 with even more amazing acts. Take a look at next month's line up HERE.

So you've read about my ordealings with the Northcote Plaza branch of Telechoice. That's why, when Optus agreed to pay for the repair of my HTC Touch phone, I took the phone to Northland Telechoice instead.

That was on May 19. They also told me how to get in touch with the Telechoice head office to make my official complaint (the State Manager is going to be in touch with me within two business days... they said back in May... they work loooong days there at Telechoice).

Anyway, last Thursday I went in and saw Neville at Northland Telechoice and asked him why I hadn't received a quote for the repair of my phone (see, they won't repair a phone unless a customer approves the quote, it's their policy). He told me that, because Optus is going to pay for the repair, he didn't bother me with a quote. I asked him when I'd get my phone back then as I hadn't heard anything from him since dropping the phone in on May 19. He quickly looked through his book and told me he'd chase it up and call me first thing the next day (last Friday).

Of course, he hasn't called me back.

For a company that deals with communication, Telechoice still has a lot of lessons to learn!

We've got magic to see!

The Catch Penny Club is on tomorrow night at 303 High St, Northcote. (Come along and catch two hours of acts for only $10).

Along with Mitcham Magic and Magic Mondays this means we now have three monthly magic shows here in Melbourne.

In more good news for magic fans there are now more magicians taking their shows to theatres:

Ken Northridge has just started a blog with the goal of documenting his quest for gold at the 2013 Society of American Magicians convention.

Should be a very interesting read!

Just received the list of contestants for the massive IBM/SAM Convention happening next month in the USA. We had booked to go but have had to cancel due to work commitments. It's a pity, because the contest line-up looks like a mini FISM!