Timing his next death-defying stunt to tie in with The Melbourne Magic Festival, David Blaine will be walking upside down on a wire over Central park, New York, for 60 hours. (Try doing magic non-stop for 75 hours if you really want to experience true torture Mr Blaine!)

This came out of the blue... did anyone else know there was going to be a magic convention in Bali next January?

Apparently there is - and Max Maven is the special guest.

I've been feeling a little down over the last two days. Some people know there is a little group of people who's main aim in life seems to be to bring me down. They've been circulating rumours, gossip and making threats to my friends - and they've been working so hard at it that some people are even starting to think that maybe their lies are true.

I've got a very thick skin, and I've copped this sort of childishness for most of my performing career. It all began when I got on TV the first time (The Earlybird Show) and someone else thought it should have been them.

I think my Asperger's helps the insults run off me like water off a duck's back, but now they're starting to attack Sue-Anne as well, and even some of my other friends who are standing up against them and saying "No. You can't say things like that about Tim!"

Of course, that only infuriates them and makes them more aggressive.

So, I started feeling a little worthless, and then today, out of the blue, we got three lovely emails from magicians we've never met who just wanted to write to say how much they loved our work! Sam, Kelly and Nathan, thanks so much for writing. I just wanted to know that your timing was inspired and we both really appreciate the encouragement thats come just when we need it the most! What's even more amazing is that these three are (I think) Christians, so don't tell me it was just a coincidence! ;)

To top it all off we just did a show tonight at Rod Laver Arena where Russell Gilbert was compering. I hadn't seen Russell for years but it was just like "old homes week" and we chatted on for ages about "the old days" when Russell used to drop into my house in Clifton Hill whenever he was passing by and session. We swapped a few tricks, and he even did his cigarette manipulations after our show. He was very excited about The Melbourne Magic Festival and is aiming to catch a few shows next week.

So, my depression is over! I was getting sucked into the little fantasy world of lies and blackness but now I've been dragged back into reality! They can keep gossiping - I've got magic to do!

Ellis in Wonderland - soon to disappear!!! 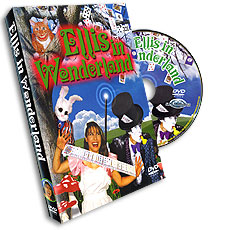 Just heard from Murphy's Magic that there are only 200 copies of our popular DVD 'ELLIS N WONDERLAND' left!

We don't have any plans to do a reprint of this DVD this year so take this as fair warning, once those DVDs are sold, it will be unavailable for some time.

If you don't have a copy of this DVD yet, CLICK HERE to read all about it and find out why

Available at all good magic stores - until sold out!

Sue-Anne and I just got back from an early morning interview on LIGHTFM's breakfast show with Luke & Susie. The energy those two have so early is so uplifting!

As usual, it was a whole lot of fun in the studio and during our spot from 7.30am to 8.00am we tried to make our magic as topical and spontaneous as possible. It was "barefoot Monday" so when they asked me to take my shoes off... you guessed it... I took my breakfast out of my shoe including a muesli bar and a bottle of juice.

Sue-Anne gave them a sample of our 'WIZARDS OF AUS' show by having a card rise in Susie's hand - which really got a great reaction - and because the big news on the show was that Susie was pregnant, I predicted the baby's name and left Luke stunned that I'd been able to "read his mind".

The spot was video taped and will appear on the LIGHTFM website in a few days. Sue-Anne and I will return to LIGHTFM Wedesday afternoon with Cassie and Leroy on 'The Buzz'.

I was chatting with Sean Taylor the other day about the different types of people who get into the magic game. I'm not judging them or putting anyone down, but I think there are five character types of magicians, though you might know of others:

COLLEAGUES
People share their knowledge and others share with them. A "colleague" shares in and celebrates the success others have because he or she knows it benefits everyone in the long run.
COMPETITORS
These people see every other performer as a threat. They are very insecure in themselves and will either try to make their act better by stealing from others ("researching") or by criticising others to make themselves seem bigger by putting the others down.
MAAAATES
Some, I think, have the Aussie 'smart alec mate' personality which feeds on the constant ribbing of colleagues. There's nothing wrong with this, but in an ego-based industry such as ours it can often be misinterpreted and, even when understood, can be very wearing on the recipient.
TRICK MONKEYS
Many magicians are just in it for the secrets. They want to know, and either perform or just collect, every secret they can and they don't care who they come from - books, lectures, DVDs, YouTube or Bazooka Joe Wrappers! They're not about colleagues or competitors, just tricks.
POLITICIANS
There are just a few who you meet at the big conventions who seem to have forgotten about the word "magic" in the phrase "magic club". They embrace their title whether it be Secretary, Treasurer or maybe even something fancy like International Continental Territorial Assistant Vice President. They're easy to spot because they're usually wearing regalia and rarely perform. There's so much magic in Melbourne from next week on. Dwayne Robbins, the world's leading Motivational Magician, will be performing his 'Inspiration Hour' at the Melbourne Fringe from Friday Sep 26. You can book tickets now by clicking here.

Who is Dwayne Robbins? (I can't believe you just asked that).Take a look at this:

Shadows taken to the next level!

iTricks posted this amazing clip of the Pilobolus Dance Theater on The Conan O'Brien show.

Rik Brooks, our good magician friend over in Tennessee, sent me this email about an incident in his local store that sounds like something out of the Twilight Zone!

I was at the grocery store close to my farm and I saw a sign with a smiling man that said something like, "If you have any concerns, go directly to our store manager, Tim Ellis!"

So I did. I saw him working at a desk and I asked if he was Tim Ellis.

"Great! Here's a quarter, make it disappear." I said.

He didn't miss a beat and dropped it into his pocket.

I laughed and told him about you.