A sneak preview of my Taiwan appearance...

Here's a YouTube clip of the last segment of this week's 'MAGIC' from Taiwan. You'll see a preview of some magician from 'Austria' called Tim Ellis:

Earth Hour is upon us!

It's only 10 minutes until the annual Earth Hour where the world is plunged into the dark ages to protest against the way we're destroying the planet... so I don't expect anyone will respond to this post for at least an hour.

It's great that we can protest against ourselves isn't it. We can turn all the lights off and show we care about our planet.

Village Cinemas is just one of the huge corporate identities joining in the protest. I know because I saw a big ad in the paper this morning saying "We are committed to Earth Hour!"

I'm not quite sure what they'll be doing... theoretically they should be turning all the lights off, including those huge ones in the projectors, as well as their sound systems, popcorn machines and cash registers.

But they do have ads promoting films that start between 8.30 and 9.30pm... so I had to scour the internet to find out what they were doing to show their commitment.

This is the only article I found and it's from last year, and take a look at this:

"the outdoor marquee (lit movie-listing sign) at the Village Rivoli cinema in Camberwell will be turned off."

Wow! They have inspired me!

The light in the bathroom is one right now and I'm in the lounge. I'm going to turn it off for the whole hour.

Tom Ogden put me onto this clip:

Did you see the first episode of 'Lawrence Leung's Choose Your Own Adventures'?

It was fantastic. Fresh, original, and highly likeable.

Even better, you can watch it free, online RIGHT HERE!

Today we were in another TV studio, Channel 31 in Melbourne.

Lee Cohen had arranged to shoot a series of short TV spots to promote the Australian Institute of Magic so Lee, Sue-Anne and I popped in to film some simple pieces that will be used between programs on Channel 31.

It's quite a challenge to fill 2 or 3 minutes in front of one camera, in a tiny studio against a black curtain, but I think the pieces came together very well and, judging from the reaction of the Channel 31 staff who kept huddling around the studio gasping "How did she do that?" I think the producers are very happy with what they got.

Tune in to Channel 31 over the next month or so and you'll get to see what we got up to!

My last day in Taiwan was spent at the Star Television studios.

I got picked up from the hotel early in the morning and taken across town to the studio where 'MAGIC', Taiwan's top rating weekly TV show is filmed. The studio was huge with dozens of people on set working hard to prepare for the filming of two episodes. 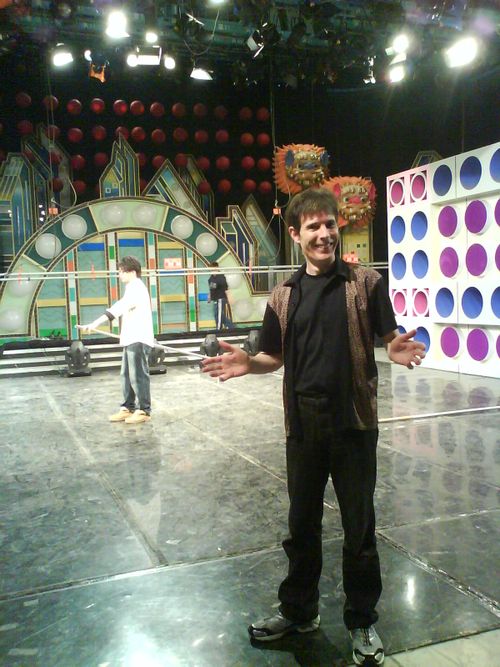 It was quite an amazing scene with at least a dozen other magicians from all over Asia (including one of Lee Eun-Gyeol's students) preparing their routines for the show.

The host, filling in for magician Lu Chen, was a famous TV personality, and there was a panel of Taiwanese celebrities on hand to watch, and comment on, the magic. There was even a live band, wh basically provided rim shots to the many funny comments.

What got me most was the huge respect that everyone on set had for magic. When I filmed 'Runaround Sue', the director thought he got a flash of something he shouldn't, so we reshot rather than run the chance of exposing when the show went to air.

I performed 'The Six Card Rap' and 'Runaround Sue' (both requested) as well as a close up set featuring 'Ring Link', 'Broken and Restored Rubber Band' and '7D'.

Happily, they were thrilled with my style of magic, the host even called me back after 'Runaround Sue' and said it was "The best ever".The show goes to air tomorrow in Taiwan and should end up on YouTube soon after that.

In Japan we often saw the 'A Plus Bakery', but here in Taipei they must be a lot harsher with their ratings. I just saw the 'N Plus Restaurant'.

I also saw a hotel that proudly proclaims itself as 'One Star Hotel'.

This morning was spent just strolling around the shops in taking in the city. I did notice there seem to be very few Westerners here in Taiwan compared to my last visit. My guide Leonardo suggested that it might be because the recession has discouraged a lot of tourists from travelling at the moment.

Leonardo is a Taiwanese magician who took me out to dinner and, foolishly, let me choose the restaurant!

While looking through tourist guides I came across one place I'd heard of before, and had been dying to visit - Modern Toilet.

Modern Toilet is, you guessed it, a toilet themed restaurant! We were escorted to our table, a bathtub covered by a huge sheet of glass, and sat on real toilet seats. 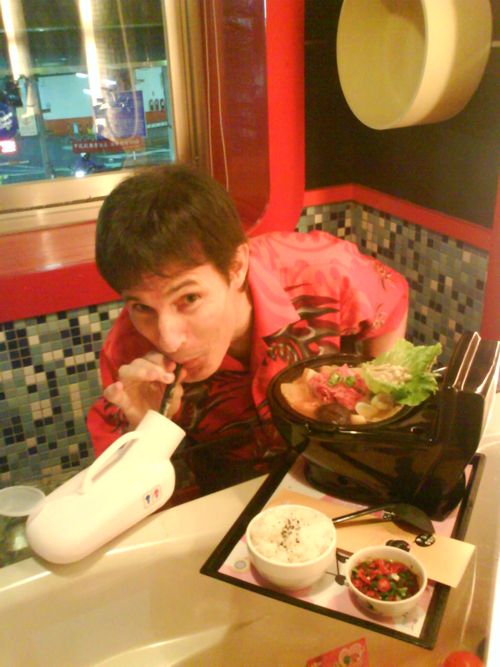 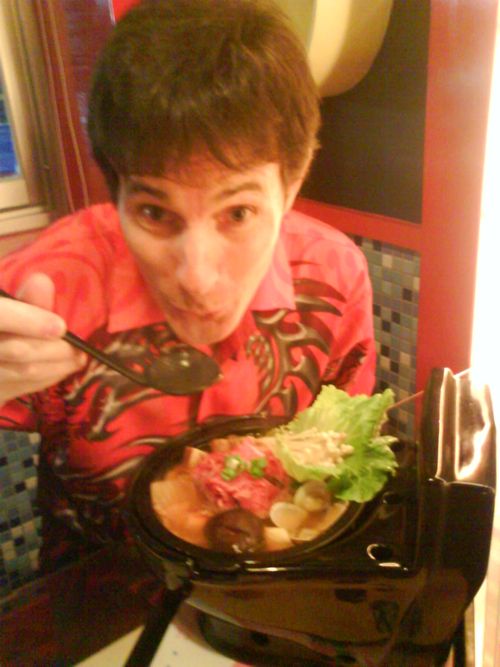 The food was better than you'd normally see in a toilet, but there was a very realistic smell around our table (they said it was the cleaning fluid they used) which seemed to unintentionally add to the toilet ambience. 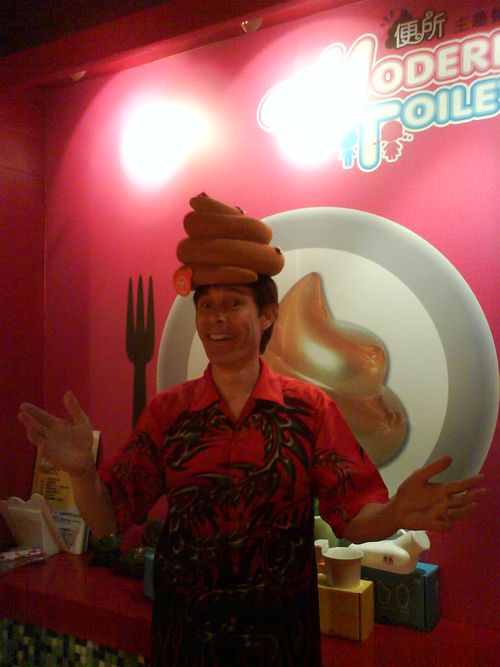 They even had souvenir shop!

While we were there, Leonardo made a quick phone call and four other magicians appeared literally out of nowhere to join us for dinner. None of them had ever heard of this weird restaurant so I bet I made a great impression on them as we all sat around the bathtub eating out of our mini toilets!

After dinner I had to get a haircut so Leonardo kindly took me to one of the many hairdressing salons - they are everywhere in Taipei - and here they cut your hair first, then wash it afterwards. 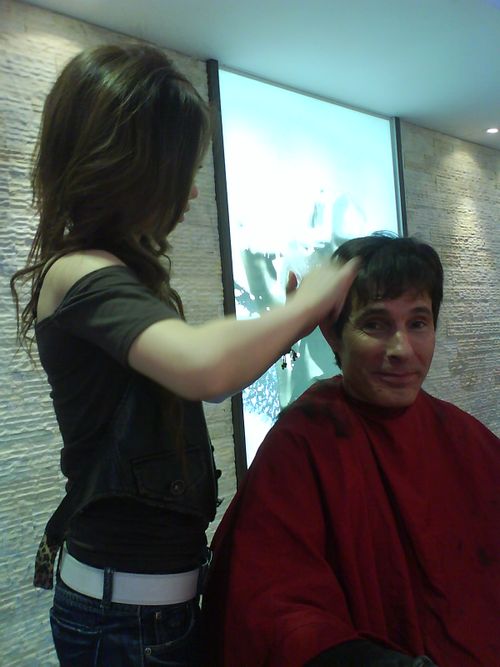 Leonardo mentioned to the hairdressers we were magicians, and we were immediately surrounded by about twenty staff eager to watch a few tricks! I borrowed a watch and changed the time, then handballed over to Leonardo who performed a four card trick to great effect.

After the haircut it was off to the nearby magic shop where I met up with my toilet-friend magicians, plus quite a few more. It was great fun as we all did a few tricks and I was very surprised to be given some as presents as well.

The Taiwanese magicians are very knowledgeable about magic, and they must practice a lot as their sleight of hand is very good. I look forward to seeing more at FISM.

Apparently, because of the success of Lu Chen and James Jian, (who both have weekly TV magic shows) magic is extremely popular here with magic clubs in universities and people flocking to their local magic shops to try and buy the tricks they see performed on TV.

Speaking of which, tomorrow I have to perform on 'Magic' myself.

I'll leave you with a preview of Lu Chen.