Years ago, we used to run 'Melbourne's Magic Nights' (which later became AIM - The Australian Institute of Magic) and we used to do all manner of odd things at these monthly events. They were almost like mini-magic conventions.

One night Joe brought a crew in from Channel 31 to do some filming for a project called 'Magic TV'.

Here's some clips of Mat Unwin calling me up to do some spontaneous MagicSports. The game is 'Make A Trick', where I'm given three objects and I have to create a trick using all three. (I'll be playing this game nightly in my show 'AspyCadabra' at The Melbourne Magic Festival.)

For the trivia-minded, this was shot on the same night we filmed a lot of the scenes for our DVD '24 Years of Living Next Door to Ellis'.

If you'd like to see more clips from the 'MagicTV' project, go to Joe's YouTube channel HERE

A night at The MagicCastle

Ever wondered what it's like inside The Magic Castle in Hollywood?

Here's a show that takes you on a tour, with a surprise Aussie connection!

Brendan Croft thought this might have been the guy selling the rip-off of the Fearson/Copperfield Laser Cutting Illusion.

No. This is yet another guy.

But I love the fact that he's so proud of his work he's added a copyright claim at the end.

and yes, this clip is titled: "illusion laser cut body like davi cofervld its ver amazing"

I received an email yesterday touting a revolutionary new levitation for only $800. With it you apparently can:

In all situations,street,mall,bus,train,meeting,conventions,a TV program and etc,you are able to do this great levitation just by yourself and with no material to be carried .

Instead of carrying it, you can wear it from home .You can walk ,sit and stand easily!!!!

This great levitation let you to sit on the water in a pool ,sea or on the air everywhere.

And more attractive using this single levitation you can perform lean and matrix also rotate 360degree!!!!

Hard to believe .I know.But it is truth.
Just one levitation with FOUR capability.

Attached to the email was this image. 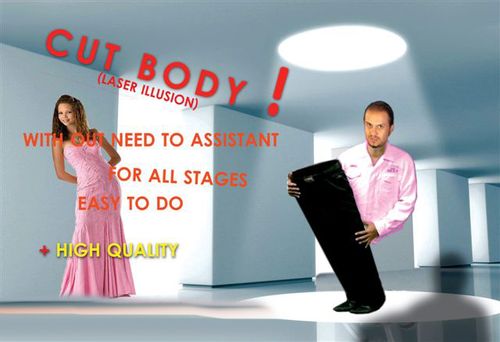 Yes, he's not only selling an authorised version of Steve Fearson's Laser Cutting (that Steve sold exclusively to David Copperfield) but he's using a substantially Photoshopped image to promote it.

So, I thought, perhaps this chap is not being entirely honest.

I visited his site and found a huge list of tricks, many exclusives including effects from Kevin James and Brad Manuel. I emailed Kevin and Brad who were unaware of this man selling their stuff. Maybe he just has them on his site to make it look legitimate?

A little research shows that he is operating from Iran, he offers low prices and when people buy from him they get stung with huge shipping fees and rubbish quality props. All of your payments must be made directly to Halk Bank (in Turkey) so don't expect to get a refund.

There are no prices listed on his site, and those who have emailed asking for prices get an auto reply telling you to email for prices.

He does run ads in the major magazines, but I hope the mags will wise up and stop promoting this dodgy dealer.

On another, but similar, angle a colleague of mine has done the right way and purchased an authentic illusion and had it imported from the USA. Customs clearance fees and wood inspection by AQIS have been more than the cost of the illusion itself.

This is why those who buy illusions legitimately, get so annoyed when local magicians build their own, unauthorised Origamis etc.

The magic community needs to stand behind those who do things the right way, and speak out against those who try to cut cornersand buy or build dodgy props. (Have you seen a dodgy Origami? The method is so transparent you might as well wear a mask and get Mitch Pileggi to explain the method in a voice over!)

As was said on The Magic Cafe on this very topic:

"When are you guys gonna realize that there are no police in the dealer profession. No honor, no ethics. The only responsibility is the buying power of the consumer, but unless they are educated, the consumer will buy what they are exposed to: the first guy who's ad they see."

The pre-FISM touring show has been a big success through China. Here's what they said on the FISM web site here.

After the successful show in the first stop Dongguan, the five magicians hurried to Shenzhen in the next morning. The schedule in Shenzhen was very tight and the first night we arrived there was a show. After a short break, magicians came to Shenzhen Poly Theater in the center of Nanshan District, Shenzhen led by working staff. The theater looked like a ball with a glass-surface. Under the sunshine, it was quite bright. All the magicians exclaimed in the same breath, ‘how beautiful!’ ‘What a fantastic theater!’ Given their respective dressing rooms, the magicians entered the rooms, taking a rest and preparing for the rehearsal. Soon, the jingling piano drifted from one of the dressing rooms. Entering the room, we found it was magician Miguel Puga from Spain who was playing the piano. Along with his fingers moving across the keyboard, a lively tune flowed from the fingers. He did deserve the master magician who came from enthusiastic Spain and even his piano was so catching. Miguel Puga’s piano seemed to arouse the passions of others and after the one ended, magician Henry Evans from Argentina sit in the front of the piano in high spirits. His piano was different from Miguel Puga’s. His tune was more melodious and even with sort of grief. According to his own introduction, this was a tune made by him when he was nineteen and after so many years he could still remember it clearly. At this moment, Henry was not the ‘mysterious card player’ winning countless awards with his exquisite craftsmanship keeping smiling all day long but a dedicated pianist drowned in the ocean of music. It was never thought besides superb skills these master magicians had respectively their own elegant talents. We really impressed by the charms of these masters.
Still the show in the evening was successful. Screams, sheers and applause lasted until the end of the show. I noticed by chance that after each master finished his own act they would came to the front of the monitor in the background as if by prior agreement and watched the others’ acts. They would exchange the idea in low voice and finally encouraged each other. After the show, the masters would exchange the performing feeling with each other, raising suggestions or giving a summary. Maybe this was the reason that they could win kinds of awards and make their career evergreen which was non-stopping learning, especially from others and keeping modest and prudent. And this was also which Chinese magicians had to learn.
In the front of the stage, enthusiastic audience wouldn’t leave for a long time. Flashes were on and flowers were around and we believed that tomorrow the show would be more successful.

The Melbourne Comedy Festival is almost over and it looks like magic has been well acquitted. Of the five, very different and unique magic shows offered on this year's program, all have enjoyed unprecedented success.

Philip Escoffey (UK) with 'Six Impossible Things Before Dinner' is enjoying excellent reviews, sold out houses and has even added extra performances.

James Galea (NSW) with 'I Hate Rabbits' is getting enthusiastic reviews for his long season at the Forum theatre.

Ashley Barnett (VIC) enjoyed six sold out houses with his show 'Dwayne Robbins Inspiration Hour' and got a great review from 'The Groggy Squirrel'.

PiP Comic Magician (NSW) got a very good review today in the Herald Sun for his show 'Hypnolarious' playing at Fix at the Docklands.

Once the Comedy Festival ends, there's nothing on the radar until Melbourne Magic Festival time. Hopefully those who've enjoyed magic shows this month will venture out again and explore more of the many and varied styles magic has to offer.

This is one film I'm not going to miss - purely for John Heder playing a street magician.

Telemarketers must have a new rule

Over the last two days I've had at least 8 calls from those wacky Indian Telemarketers, but judging from the brief duration of the calls, they must have some kind of new rule about getting us off the line quickly.

Which is ironic, because usually it's us who are trying to get rid of them.

I'll give you an example:

"Hello, may I speak to the owner of the business?"

"Hello, may I speak to the person in charge of your telephone accounts?"

"Are you a Telemarketer?"

"I think you're a Telemarketer!"

The calls have been averaging at less that 30 seconds.

Why bother calling me at all if you're not even going to TRY to sell me something.

The only one I could keep on the phone around one minute was a guy I tried my "echo" technique on.

Whatever he said to me, I repeated back to him with the same accent and intonations.

It was great! I'm sure he thought there was something wrong with the line but, like the rest, he hung up quite quickly.


I think it's funny how some people think it's important to be polite to these people.

They call us at all hours, trying to sell us something by misrepresenting themselves or asking us to take part in a fake survey, but worst of all, they are quite happy to hang the phone up in our ears with no warning and not so much as a "I'm sorry for troubling you, good day!"

He's at the 7 minute mark

Philip Escoffey got another great review in The Age, this time earning four and a half stars! (His shows are now selling out and he's even added extra shows to cater for the demand!) Seems like magic shows are the hit of this year's Comedy Festival.