As we're heading over to China soon on a long flight with over a hundred other people crammed into an airtight container, we thought it best to get some masks to protect us against the dreaded Swine Flu.

Unfortunately the chemist has sold out of all the good N95 and P2 masks.

I somehow think this one won't be quite as effective. 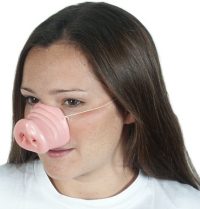 I really enjoy doing shows for private parties - small groups of 10 to 20 people at their home after dinner. It's quite a magical experience all round.

I did one last night and here are a few tips and observations:

1 - Try not to carry too many decks on you at one time to avoid confusion. About 12 is the limit. I accidentally gave someone a Deckstress deck to shuffle and no, they don't survive the shuffle...

2 - Performing some effects on the floor with people sitting in a horseshoe shape around you is an ideal setting. I prefer it to a table because it gives everyone a sense of direct contact with the performer. The table almost acts as a "fourth wall barrier" between the performer and the participants.

3 - I call them participants because, in such small groups, it's possible to involve everyone personally. Whether they are holding a card or a rubberband, they take part, and they should be acknowledged as they key ingredient in the trick's success, not treated as props.

4 - In these settings you can afford to do longer, story tricks. I got to do my version of Heirloom, 'Poker Alice', from the 'Poker In The Face' show. In normal close up there are way too many distractions. But at a private party everyone listens to every word and was almost gasping in disbelief before I showed the photo of Alice holding their chosen card.

5 - A tangled Gypsy Thread is not nearly as impressive as one that unfurls smoothly.

6 - Utilise the environment. Last night I had them put a prediction in the freezer for safe keeping. At other parties I've asked everyone to follow me into the kitchen where we got an orange and a knife to cut it open with to find a bill inside. Think of how 'The Mentalist' plays it on TV. He never seems to carry props with him, he uses "found objects" and in a private home situation that can be incredibly powerful.

7 - Never treat it as a "gig". You've simply turned up to pick up a cheque, and while you're waiting for them to write it out, you might as well do a few tricks to keep everyone amused.

8 - Do you dress more casually for these events, or wear your standard "magician" costume? Still undecided. I wear my blue jacket pretty much everywhere. It's not quite as formal as a tuxedo, but it designates me as 'The Magician', a special visitor. Perhaps your costume might make you look ridiculously overdressed at an informal party? (Maybe mine does too?) Something to ponder.

9 - Mentalism effects play more effectively in a private party environment but, unless that is your character, don't do too many or the tone of the party will shift from "fun and amazing" to "sombre" as party people start to ponder the deeper questions of life and the hereafter.

10 - Don't stay on after the show for drinks and nibbles. They will always ask you to stay. I'm told it's "hospitality". However by doing so you risk destroying the air of mystery and magic you've just spent the last 30 to 60 minutes creating. Arrive set to perform, go straight into your show. Do your big finale and them leave. The front door is your wing, your stage entrance and exit. If they book you for a 30 minute show, do your 30 (maybe a little longer if you feel generous) but then take your applause and leave. Leave them to discuss the wonders you created amongst themselves, and not debate them with you. Again, look at 'The Mentalist'. He leaves people intrigued by popping in, doing or saying something odd, then leaving. It's the way of the magician.

Of course, in order to win you have to catch Swine Flu while you're over there...

Times Online reported that three hotel chains have started an exciting initiative designed to lure tourists back to Mexico.

The company's guarantee offers three years of free holidays to any guest who contracts the (H1N1) flu virus within 14 days of visiting its resorts in Cancun or Playa del Carmen.

What a deal! But as is the case with anything that seems too good to be true, there is a catch.

Holidaymakers who wish to claim the free holidays must prove that they have contracted Influenza (H1N1), by providing blood test results. The offer includes a companion but does not include flights.

Thanks to the GFC (the 'Global Financial Crisis', not 'Great Fried Chicken') there has never been a cheaper time for Australians to attend a FISM!

Airfares to Beijing with Qantas are now BELOW $1,000 return including taxes!!! (And this time last year I was trying to negotiate group prices with them and they wouldn't budge below, $2,200 per person! Boy am I glad I passed on that "deal").

However, if you are still deciding, hurry up because the main theatre in Beijing seats 2,000 people and there are nearly 1,900 registered so far! If you leave it too late you'll be sitting in another room watching the shows on a monitor - so go to www.fism2009.org and book now.

(PS: If you are registered and have filled out the online form for your invitation letter but it hasn't arrived yet, email info@fism2009.org immediately and they'll sort it out for you).

For those in the area of Northcote, Thornbury, Heidelberg, Ivanhoe, Preston and Reservoir, you can catch me on the radio tomorrow morning around 9.30am. I'll be on Judy Bennett's show on 96.5 InnerFM www.innerfm.org.au talking about the upcoming Australian Junior Magic Championships.

From waaaay back in the vaults!

I don't want this to sound like a criticism or a complaint - it's purely an observation - but here we are less than 60 days from the start of FISM, The World Championships of Magic, and have you visited the FISM online Forum?

Now if you went to the last FISM you know how helpful the Stockholm Forum was. If you posted a question you'd get a reply almost immediately from one of the moderators. Communication is the key and everyone went to FISM 2006 feeling very well informed.

Take a moment to visit the FISM 2009 Forum at https://www.fism2009.org/forum/default.asp so you know I'm not exaggerating.

You know I'm a HUGE fan of FISM, and I really want FISM China to succeed, but the state of the FISM Forum is not a good omen.

Add to that the fact that I have emailed info@fism2009.org several times over the last few weeks about the 'Invitation Letter' problem and still have had no reply.

In this age of instant communication, there really is no excuse for registrants feeling "out of the loop" as we head up to such a major event as FISM.

One of the promises FISM China made was that there would be many, many FISM staff ready to help registrants and answer their every question. It might be good to get a few of them working online now.

We heard the news this morning from Dale Salwak that Japanese magician Mahka Tendo has died.

"It is with much sadness that I report the passing of Japan's Mahka Tendo from cancer early on the morning of May 26th at the age of 49.

Mahka was known and respected and loved by the magical community all over the world. For many months he fought bravely and strongly, his family at his side.

Many magicians, upon learning of his illness, continued to send him DVDs and e-mailed messages of encouragement. These meant a lot to him. He died knowing that others cared."

Mahka Tendo is best known for his ground-breaking work with jumbo card productions which earned him a Silver Medal in Manipulation at FISM 1985. More recently he's brought out a selection of products including canes, with SEO Magic, and he was presenting a weekly magic spot on NHKTV in Japan.

We last saw Mahka at the Asian Magic Convention in 2007 where he lectured with some of his new products. His innovative thinking and friendly personality will be missed.

If you enjoy B-Grade movies... this is way below par 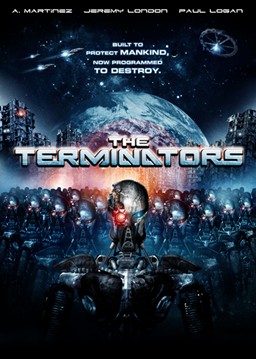 it's refreshing to see them produce something original for a change.

Our next public show is coming up on Friday June 12.

It's the LIGHTFM Comedy FUN Raiser - a comedy night designed for the whole family.

On the bill will be impersonator BEN PRICE, LightFM personality LEROY BROWN, and ELLIS & WEBSTER.

The show runs from 7pm to 9pm so you can bring the whole family and not worry about keeping the kids up too late.

Tickets are $25 per person, $20 student/concession*; with children 12 and under completely free!