I got a phone call this morning from someone representing the Lion's Club asking if I'd like to sponsor some kiddies to go see this year's edition of The World Festival of Magic at the Melbourne Exhibition Centre.

Now I'm well aware of this show, as it comes back year after year and raises lots of money for charity and gives employment to a lot of local entertainers. Sue-Anne and I have been approached to do the tour several times as well.

So I listened to the lady give her sales pitch and I was a little surprised at what she said.

First she told me that last year generous businesses like mine enabled 15,000 disabled kids to see the magic show. That seemed like a pretty high number. I asked "In Melbourne?" Yes, she confirmed that 15,000 kids saw the show in Melbourne last year.

As the venues (MCEC and Festival Hall) only seat 1,500 max, that means ten shows. But they didn't do ten shows in Melbourne last year.

She told me she was in charge of making sure all the kids from the special schools in Northcote got to see the shows. I asked her which special schools they were (there's only two I'm aware of) but she said she didn't know.

Fair enough, she's probably just employed by a service and is working in a phone room, but when you're asking businesses to donate around $50 per child to attend a magic show you must expect them to have a few questions. I think it's really important that the telemarketers are given enough information to be able to answer those questions, otherwise the whole thing looks really dodgy and the Lions Club doesn't deserve to have it's named tarnished in that way.

Anyway, the show will start it's Australian tour up in Cairns on September 10. I believe Magic2 are presenting the bulk of the show again, with James Dimmare as one of the special guests.

They'll be performing 3 shows in Melbourne on Sunday October 25 at the MCEC.

For their full Australian Tour Schedule - CLICK HERE or you can get full details about every show using The World Festival of Magic Show Locator.

Simon Coronel at The Magic Castle

If you're in Los Angeles this week, you can stop by the world famous Magic Castle in Hollywood and catch FISM Award Winning Aussie, Simon Coronel, performing in the Close Up Gallery from August 31 to Sep 6.

Also performing at The Castle during the week is honorary Aussie, Tom Ogden, so if you catch either of them in action - say hi from us!

"I'm an illusionist and I'm okay!"

Dazzling Dan sent in this photo and sent my mind spinning as I had to try to remove mental mind blocks to figure out where it came from. (No doubt you'll be creating a few mind blocks of your own as you try to erase the image from your memory now you've seen it too!) 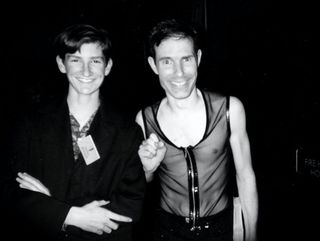 The costume I'm wearing (and you should be relieved you're only seeing the top half of it) was borrowed from another magician (who wears it for real) and it was intended to be a parody of the way illusionists dress with their leather, chains, pvc and mesh.

The sketch was performed at the end of a parody show we did at the 1998 Australian Magic Convention in Sydney and was a magical version of Monty Python's classic Lumberjack sketch.

Our version began with me attempting to perform as a very serious mentalist (Bent Klackmore) dressed in a black suit, and it went a little like this:

"Welcome to the unexplored world of the mind. In our day to day life we only use 3% of our total mind’s capacity. Imagine if you will, what the possibilities are if we....Oh sod it! I didn’t want to do this. I don’t want to be a mind reader. I don’t want to rabbit on all day about... palm reading... dowsing... astral travel... it’s all a fake!

I wanted to be... an illusionist! [Music begins and I strip off to my creepy illusionist costume]

Leaping from showroom to showroom as I cruise down the mighty strip of Las Vegas, Nevada. The metamorphosis trunk. The zigzag. The asrah. The mighty origami. The puzzling geometric box. The plucky little headchopper. The thin model sawing. The thrusting power of impaled. The sensual penetration of interlude. The thinly disguised B&D fantasy of the assistant’s revenge... With my best roadie by my side we’d sing sing sing

I’m an illusionist and I’m ok

I work all night and I sleep all day

I cut up girls, and though they smile

I point and look angry

On Wednesdays I do matinees

The kiddies come to see.

He cuts up girls, and though they smile

He points and looks angry

On Wednesdays he does matinees

The kiddies come to see.

I count all my illusions,

The most important thing is

that I’ve got more than you!

He counts all his illusions

The most important thing is

That he’s got more than you!!

I play with my white tigers

And then show off my scars

I dress in leather clothing, and hang around in bars...

He plays with his white tigers??

He works all night and he sleeps all day"

You can singalong to a terrible midi karaoke version of the music here.

For those who are into iPhones and like to mess around with magic and gags, Andrew Mayne has some free apps at his site  http://www.ipodtricks.com/

Here's a preview of one of them.

Sue-Anne, Lee Cohen and I went out the other day to see the movie 'Adam' (see trailer above). It's about a guy with Asperger's Syndromre - the way he lives, the way he interacts with the world, and the way he tries to form a relationship.

I certainly related to a lot of the things Adam did, and the way he behaved, but according to Lee & Sue-Anne, I was more like Adam that I realised!

At first I was worried it was a bad thing, but I was reassured by both of them that it's fine. They've coped with my eccentricities for many, many years so far and pretty much gotten used to them.

But it was interesting just watching "my life" from the outside and seeing how weird I must appear to be to everyone else.

Go see the movie though. It's funny, charming and will make you smile... and realise that some strangers are a little stranger than others...  ;)

Dan & Dave slow it down

This is just fantastic stuff!

I've always been impressed by the technical skill that most XCM, flourishists and cardicians have - but when you see it in slo-mo - wow!

Andy's Magic of Hong Kong, one of the most extensive manufacturers of magic rip-offs, was a dealer at FISM 2009. They behaved themselves too. Not only did they have pretty much no copy products on sale at their stand, their website vanished a few months before FISM.

Well it's back and I'm amazed at the number of blatant copies. 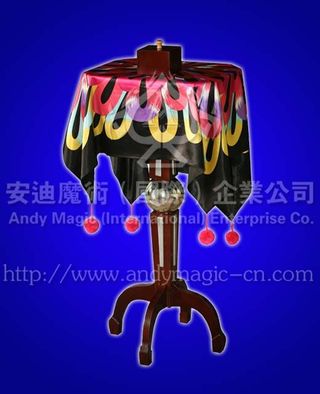 From Losander's table complete with box on top, to Kevin James' Bowl-A-Rama 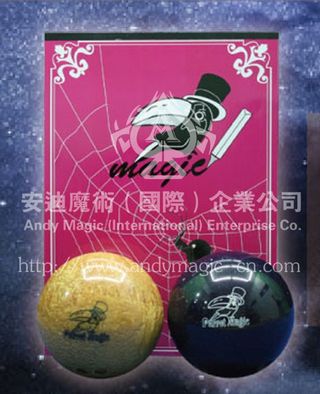 To ban or not to ban, that is the question 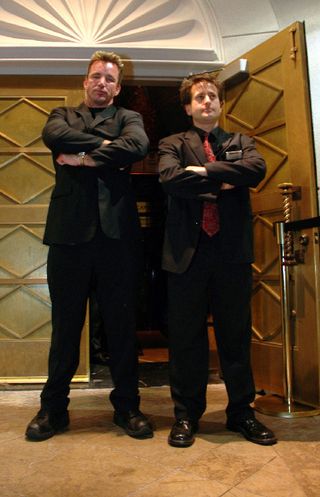 Big buzz in the magic world right now is the banning of people from attending the Blackpool Convention and, in turn, FISM 2012 (which will be held in Blackpool). You can read more details here in The Genii Forum.

Rather than get into discussions about personalities here, let's look at the actual notion of "banning" someone from attending a magic convention.

Could there be any valid reasons for doing so?

When I ran one Australian Convention we did return one registrant's application and explain that we would not accept his registration. Reason: we wanted to be able to offer our junior registrants a safe environment. At a past convention we had to allocate a committee member (who was a policeman in his day job) the job of keeping an eye on this magician as he had a penchant for spending time with underage boys.

The Convention was not a public event, so the committe reserved the right to refuse any registration without explanation.

Some may not agree with our decision to refuse that magicians registration, but it was a decision discussed at length by the committee and accepted by the magician in question.

To the best of my knowledge, that was the only time a magician has been refused registration to an Australian convention (though it was made very clear to me that I was not "welcome" at a recent Melbourne convention - reason: The organiser didn't like me).

Here are some other reasons why magicians have had their convention registrations refused:

If one person is running a convention, I think it is fair enough that they can ban people from attending if they choose too. It is not necessarily a great thing to do if you want to promote harmony within the magic world, and if you do decide to ban someone, I think the reason needs to be pretty serious.

If you are running a convention with a committee, then any bans need to be discussed and agreed upon by the committee as a whole.

If you are running a convention under the jurisdiction of FISM, then I think bans need to be agreed upon not just by the organising committee, but by the FISM Presidium. In my opinion someone would have to do something very serious indeed to be banned from FISM.

According to Alan Chester of the Tommy Cooper Magic Shop in Blackpool: "Anyone banned from Blackpool Magicians Club events and Manchester events are also barred from FISM when it comes to Blackpool".

I certainly hope this isn't true as, having been a victim of a form of "banning" myself, I find this sort of behaviour very divisive and counter-productive to enhancing harmony within the magic world.

"On hearing that FISM 2012 is coming to Blackpool I decided to phone up Arthur Carson of the Blackpool Magic Club with the view to purchasing tickets for FISM. He told me I was still banned for attending Blackpool and an application to attend FISM will have to gobefore the Blackpool Committee which will be meeting in approximately 8 weeks time and they will decide whether I was eligible for a FISM ticket. However, it was express to me that it would be unlikely that I will be able to get a ticket to attend FISM ... "

I do wonder what will happen if a "banned" magician wins their Continental FISM Championship in 2011? Will they still be refused entry to FISM 2012?

I hope that an official word will come from either Derek Lever or the FISM Presidium very soon because, at this stage, no-one really knows what to believe!

Imitation is the most sincere form of... ?