Bookings now open for our next School Holiday Show

During the next school holidays, Sue-Anne and I will be presenting THREE PERFORMANCES ONLY of our new family show TWO OUT OF A HAT at the Northcote Town Hall. 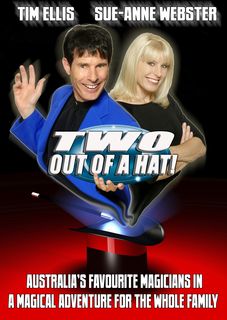 You don't want anything closer than this!

So the question is... do you really have to be nice to them?

The other day, after I had yet another Telemarketer hang up on me, Sue-Anne said "You probably made her cry." She reminded me of the film 'Slumdog Millionaire' and how most of the Telemarketing people in India are lucky to have a job at all.

Now, I have nothing against these people personally. I don't even know them. But I do know they are trained to lie to us.

My parents are generally much more polite, like many people of their generation, and they will listen to the spiel and try to wait for a gap in the monologue before saying "No thankyou, I'm not interested." Then the Telemarketer's training kicks in and they launch into another spiel about how they should be interested.

Yes, these people are only human, and should be treated with respect, but the very job they are doing strips them of respect.

I know so many people who have been polite, and ended up scammed by these Telemarketers - or to be more precise, their employers.

So what do you think?

Be polite and say "No" knowing full well they will just continue talking over the top of you?

Listen to their spiel and, in the process, risk being sucked into it?

Chat with them until they hang up on you? (My preference).

Slam the phone down in mid conversation? (As they have to me quite frequently).

Tags: Nice to be nice

FISM all over the world

FISM have just reached an agreement to stage the first ever FISM North American Magic Championships in 2011. You can read the full announcement here.

This means that, with the exception of Africa, FISM Continental Championships will be staged all over the world in 2011 leading up the the FISM World Championship in 2012.

This is a major step forward in FISM International President Eric Eswin's vision of transforming FISM into a truly global event and, hopefully, will ensure an extremely high standard of competition at the FISM World Championships of Magic in 2012.

FISM all over the world

FISM have just reached an agreement to stage the first ever FISM North American Magic Championships in 2011. You can read the full announcement here.

This means that, with the exception of Africa, FISM Continental Championships will be staged all over the world in 2011 leading up the the FISM World Championship in 2012.

This is a major step forward in FISM International President Eric Eswin's vision of transforming FISM into a truly global event and, hopefully, will ensure an extremely high standard of competition at the FISM World Championships of Magic in 2012.

Very nice words from Mark Reed at 'The Magic Vault'

"To be truly professional and unique, you need to take those effects and turn them into something of your own. New patter, new handlings, new reveals... take the original and MAKE IT EVEN BETTER.

One example of this is the magician Tim Ellis. He does the cups and balls, the 6 card repeat, and many of the other "old classics".  HOWEVER - take some time and look at his performances on You Tube and you will see truly original creations. The effects are not the typical, watch the ball go from this cup to that cup... or the "how many cards do I have now? still six!!!" He took those effects and made them his own and in turn is seen as a truly entertaining ORIGINAL performer.

So ask yourself this - "How can I make this effect better and something people have not seen before?"

Your magic will only get better if you do..."

(From his latest newsletter)

Dotcom Chrome is dead, or are they...?

You may recall the massive Telemarketing scam operated by Dotcom Chrome.

Well as you can see from their website - they seem to have shut up shop - which must be quite a shock for their hundreds (or thousands) of customers.

Not surprising though, when they got this many complaints.

And if you go to their main site and try to click on any one of their many international offices, you'll get nowhere.

But have they really closed down?

This operation, called Dotcom Platinum, looks embarrassingly similar to the Dotcom Chrome website. They even have the address and the same company director.

Not that I'm suggesting this happened... but just like a Phoenix rises from the ashes, a dodgy company threatened with lawsuits will simply declare bankruptcy and start again with a new name.

With Sue-Anne in the opening scene!

Ellis & Webster returned to The Geelong Thoroughbred Racing Club after stunning the guests at last year's 'Horse of the Year' dinner. This time, their brief was to make The Melbourne Cup appear! 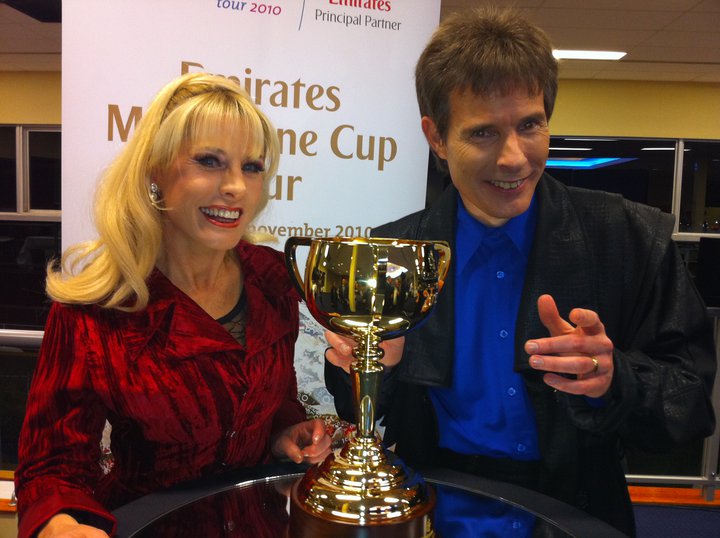 The Cup itself, weighing 4kgs and valued at $150,000, can only be touched while wearing gloves. So it was quite a challenge to come up with a way to make it appear out of nowhere - especially in an open dining room surrounded by guests! (Not to mention the Cup's security guard who looked very nervous all evening!)

After performing some magic with money and betting tickets and running a Fantasy Race Call in which the winner was correctly predicted, Tim and Sue-Anne uncovered a trestle table, walked all around it, showed underneath it and then put two mirrors on top of the table. A split second later, amid a shower of confetti, The Melbourne Cup appeared on the table in all its glory.

The reaction was tremendous and the guests, including past Cup winning jockeys and trainers, were very generous in their praise.

With Marco Tempest receiving a Merlin Award for 'Contemporary Magician', and Tony Clark and Paul Reder winning 'Producer of the Year', people are again asking about The Merlin Awards.

By giving "the big guys" Merlins, it established the awards as having credibility. But, as the list of "award winners" grows ever longer, including magical novices like Scarlett for 'Best Female Magician' and 'Fairy Star' from Thailand.

And did you know the Merlin for 'Best Close Up Magician' just went to a 27 year old from Brunei who, I bet, you've never even heard of before?


Are there assigned categories for awards? Sometimes title are given annually, sometimes not. Most frequently new titles are created like 'Best designer and first producer of magic items', '30 years of exceptional magic', and 'Excellence in the impalement arts'.

Here's one I just discovered. 'Best Manipulators in Vietnam'.

One of the other problems is that Tony Hassini claims: "Every three years, the International Magicians Society hosts a banquet dinner, where those magicians who have acheived the highest level in their craft are awarded the coveted Merlin Award. The voting members begin with approximately one hundred names and narrows down to a handful. The criteria that the voting members consider are talent, showmanship, originality, skills, and above all the rare ability to entertain under any conditions."

Yet, there is no banquet. The awards aren't handed out every three years, but constantly. Several people I personally know have told me they "bought" there Merlin awards (for publicity purposes) by paying Tony and flying him over first class to present them.

Murray wrote "I have a Merlin Award... It was given to me at the Flamingo when I was performing there... it's a publicity stunt! But the Merlin award is probably one of the best designed and sharpest looking awards in magic. FISM should adopt the same look... it looks like an oscar... Bottom line... if you can get PRESS from something do it... it's part of the bizzzzzzzz...."


If you are not a well known magician, or can't afford a Merlin, the recent 'Miraculous Amber' magic convention in Latvia advertised they were giving away three Merlin Awards as part of their competition. Sure enough, Xavier Giro from Spain won the Merlin for 'Most Original Act', Jimmy Kikuchi from Japan 'Best Cabaret Magic', and Timothy Trust & Julie for Germany now have the 'Best Stage Magician' Merlin.

I first posted about The Merlins here:

and I tried to present a complete list of 2009 winners here:


Personally, I have no problem with the recipients of the awards. Every one of them I have met, without exception, are genuinely nice people and extremely talented magicians. Some have been given their awards out of the blue while others have bought them.

According to the IMS website, Bryan Dean and Franz Harary are on "the board" so, I assume, they'd have some say in the way the Awards are decided. I'd LOVE to hear from them.

One magician, a Merlin Award recipient who shall remain nameless, told me "Tony's come up with a pretty good racket. He gets flown all over the world first class, treated like a celebrity, paid for these awards and while he's there he films the winners and uses the footage to make more DVDs to sell through his magic club."

I was guest artist at the recent magic festival in Malysia where Tony Hassini was also attending to present (I think) eight Merlin Awards. I tried to get the opportunity to chat with him and interview him about the Merlins... but he seemed to be avoiding me for some reason.

Hopefully someone will be able to get an interview out of him one day.