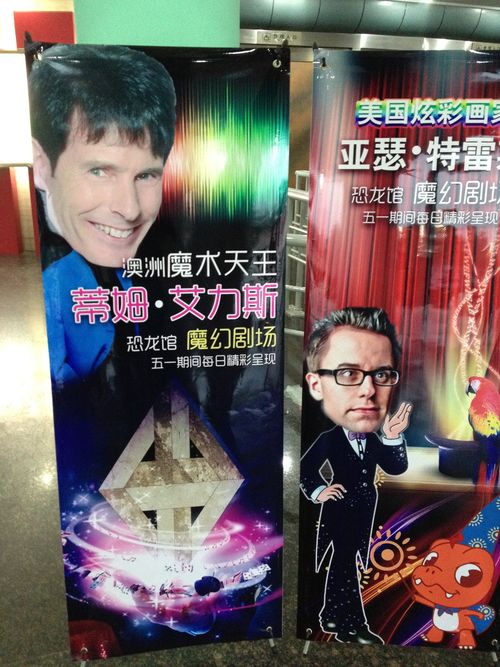 These are the posters advertising my show and Arthur Trace's show here at Dinosaurland.

Another four shows back to back and it's feeling like a gym workout! I'm only doing four tricks (razorblades, bill to banana, Runaround Sue and the 6 Card Rap) but my show is running at 30 minutes. I have a feeling the translation is doubling the length of the banana routine but, surprisingly, it's one of the highlights of the show - for me as well as the audience.

I have no idea what the translator (Borg Yuan, who is also the booker, pictured below) is saying, but when the Chinese ladies reach into my pocket and feel the banana the reactions are off the charts! One lady, after diving in five times finally pulled the banana out and was so shocked she threw it in the air and in landed in the moat in front of the stage. (Yes, our stage has a moat in front of it...) It was hilarious.

Another lady, when I asked her to hold the banana up so everyone could see it, held it in the middle and slowly tightened her grip until the banana split open at both ends and started oozing everywhere. Again, I have no idea why she did it but it was hilarious! 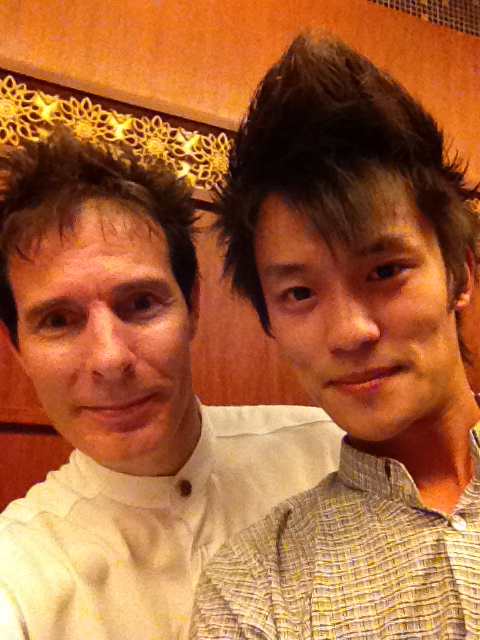 The humidity here today was even worse, but Borg delivered on the promise of some talcum powder and, though my arms looked even more ghostly white than usual, I was able to perform Runaround Sue without any technical problems.

However, doing a 30 minute show, then having a 30 minute reset, immediately followed by another 30 minute show (repeat) is pretty exhausting even under the best of conditions, but performing in this weird dinosaur cave theatre with non-existent air conditioning is extremely challenging.

The best thing, however, are the audiences. They are really loving the shows which is absolutely staggering to me. Maybe it's one of those enigmas like how the French really love Jerry Lewis?

I'm also pleased to report that I'm being very well looked after and we get taken out to dinner every night with several of the other magicians who are doing street shows in the park.

The picture below is an example of the little magical touches we encouter even in restaurants. It's a tomato rabbit. How cute! 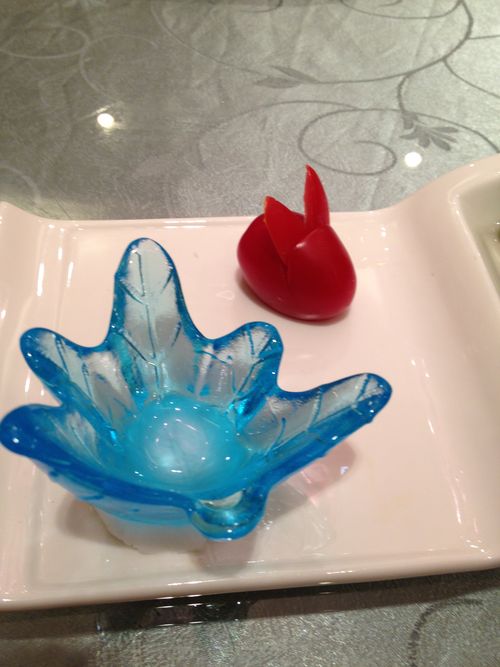 Wow. The thing I hadn't counted on (other than the sheer exhaustion of doing four shows back to back) is, as Arthur Trace pointed out, the humidity here in China at this time of year.

But what has made this fun is the theatre we are performing in. 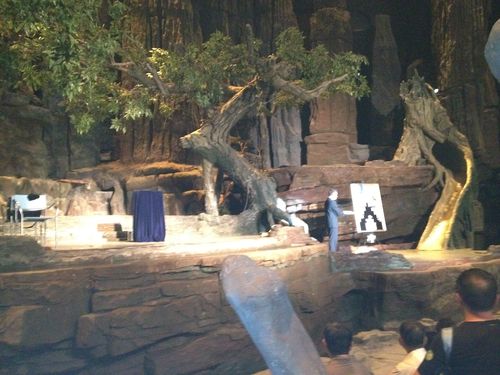 It's made to look like the side of a mountain with a variety of different performing spaces and is incredibly challenging to work in. That's Arthur (above) performing his FISM Award Winning act... see how hard it is to not get distracted even in a still photograph.

The whole theatre is filled with interesting things to look at, even dinosaurs... this is Dinosaur World. A theme park based around a 75% complete fossilised dinosaur discovered here many years ago.

No wonder they asked a living dinosaur like me to come and perform.  ;)

He is very kind.

In fact, we are all off to a gala dinner tonight to celebrate completing Day One of the shows.

So, I will leave you with some pictures of the park I took this morning on the ride in. 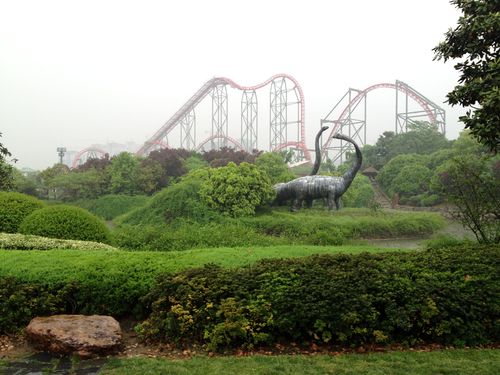 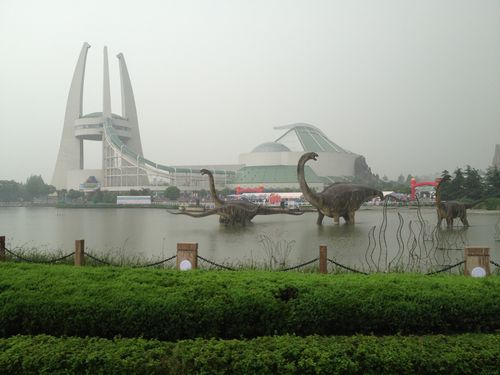 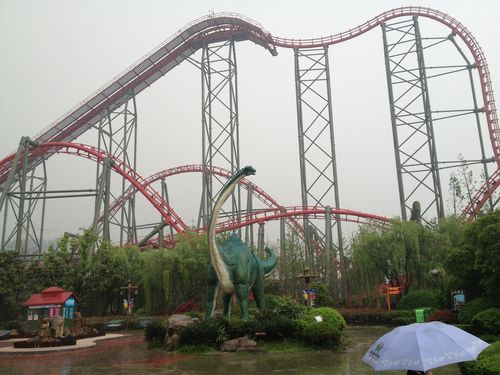 It's 10am and I think I've finally had enough sleep to be able to get up and do four shows... leaving here in two hours time.

Of course, looking at this beautiful hotel room, you know I really don't want to leave... 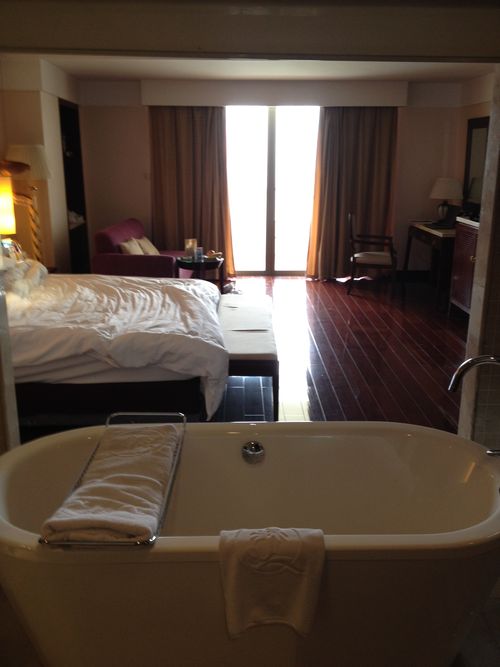 But one look outside my balcony and I'm not only overlooking a golf driving range, but a huge theme park complete with roller coasters, waterslides and lots of screaming guests (I can juuust hear them if I open my window). 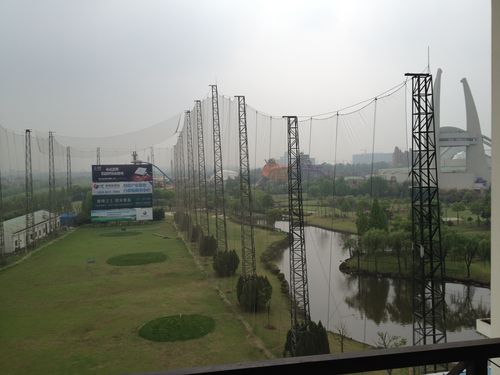 It's hard to see due to the omnipresent Shanghai mist... and I can hear fireworks going off right now.. at 10 in the morning..

There are several other magicians here as well. The only one I can remember from my meeting last night at 3am is Arthur Trace.

It's going to be an interesting day!

I'm briefly reactivating this blog because I'm in China. A land completely free of Facebook, Youtube and Twitter. Just letting family and friends know I've arrived safely, albeit delayed at Melbourne Airport by 5 hours, and it's now 3.15am Shanghai time (5.15am Melbourne time!) and I'm ready to get some sleep before they pick me up at 12 noon and whisk me off to a theme park where I'll; be performing 4 shows back to back tomorrow and for the next three days.

It's always an adventure!