106 entries categorized "A trick a day"

This is an hilarious sight gag/trick. You take a straw, in it's wrapper, and you poke it in your left ear while, at the same time, pulling it out of your right.

Very easy to do. Impromptu. And very, very funny.

Reading this you wonder if there wasn't a time when magicians did a lot of stage manipulation with eggs.

Sounds a little odd, given that we do all that stuff with rubber billiard balls nowdays.

But the more you think about it, wouldn't vanishing a real egg, or multiplying them, look really quite amazing today?

Anything that makes you stand out from the pack has got to be good!

This whole book is not about tricks, but presentations.

Punx has written stories for classic tricks that would be entertaining enough without the magic.

This story is for Dai Vernon's 'Cutting the Aces'. If you, like many, are at a loss as to what to say when performing your magic, take a look at this unusual and very entertaining approach.

What a brilliant, impromptu trick, designed for use with a fax machine, but one that would work equally well by email or even on the radio.

It's chock full of tricks you can do with anything... or in this case, nothing.

Over 37 pages alone of tricks you can do with just your hands!

The problem with this trick is that the method has been totally over-exposed. Even yesterday, just chatting with some folk, one mentioned she tried to learn some magic once then promptly discussed the method used for the vanishing silk in front of the assembled gathering. Even more weirdly, everyone seemed to be aware of the method, from their own experiences, but all added they appreciate when it's "well done".

Go back to this tried and true method of vanishing a silk and you can end completely clean and leave them totally baffled. Plus, you can use a decent size silk, not a "mouse's hanky" variety.

Of course, some will still say they know how it's done but you "did it well"... but with some clever choreography, you can let them hold your wrists and examine your hands thoroughly as soon as the silk has vanished.

You can also ruin their understanding of the vanishing cigarette this way too.

Now that you've learned a dozen ways to vanish a coin, put them to good use with this simple but effective trick.

Borrow a coin, have it signed, vanish it and it reappears in any egg chosen from a carton of eggs that can even be provided by the spectator.

The method is so ridiculously easy you'll be too embarrassed to accept the applause...

You really can't judge a book by it's cover, and this tiny paperback really does prove that old adage true.

Chapter Four is devoted to coins and it contains a virtual cavalcade of coin sleights.

For the price of this pamphlet, and a few hours of serious study, you'll really be miles ahead of the competition!

What an interesting trick, very visual and fun.

Anyone hands you an orange and you immediately pull metres of ribbon out from inside of it.

Simple method but quite a bizarre and nonsensical visual image.

This is a book filled with ads from old magic catalogues and it's fascinating to see the way tricks were promoted "back in the day"... especially if you yourself bought them based on the somewhat "creative" descriptions in the ads. 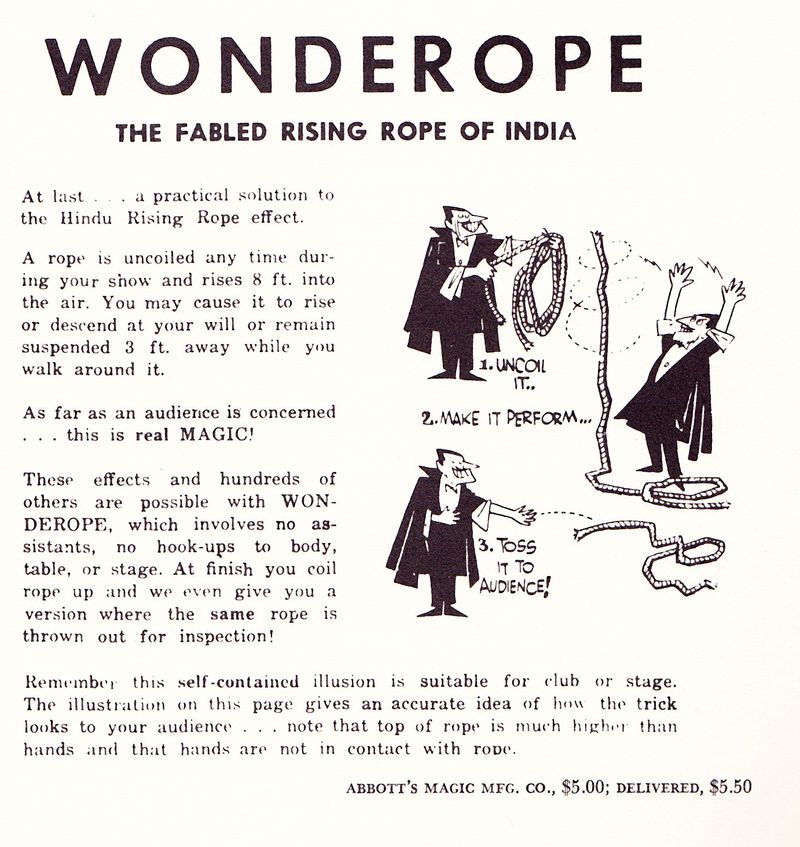 I bought a WONDEROPE and, as I seriously doubt this could actually be performed by ANYONE, I'd like to point out a few things:

The trick itself is a 3 ft piece of poor quality rope, with a 1 ft length of wire in the top third and a loop of black sewing thread about 6 inches from the top. The idea being that, if you hold the loop (and the entire audience squints) you can create the appearance of the rope rising and possibly floating.

2 - "You may cause it to rise or descend at you will" (Yes) "or remain suspended 3 ft away while you walk around it." (Absolutely impossible).

5 - "We even give you a version where the same rope is thrown out for inspection." (You must first, discretely, pull the wire out and break the thread off...)

6 - "The illustration on this page gives an accurate idea of how the trick looks to your audience..." (Note that rope is 3 ft long... so that means the magician is less than 12 inches tall).