It looks as though the entire 'Downfall' movie has been redubbed and turned into a completely new film complete with a shocking twist at the end!

Blackpool FISM and The Bans

Blackpool FISM President Derek Lever has issued a statement over on the Magic Bunny to clear up all the internet buzz going on about FISM 2012 and the banning of certain people including Paul Daniels.

This is very good news.

It means that, despite the letter Craig Mitchell received where he appeared to be banned because of his "pathetic rantings" about Blackpool, perhaps this was not a "serious offence" but merely a "difference of opinion" and he is not banned at all.

And though Derek was quoted in the press saying Paul Daniels "is not welcome in Blackpool and we will not be inviting him. We don't want him in Blackpool, he is a has-been." Derek's statement above means Paul will be made quite welcome as a paying registrant.

Derek is quite right. If you are to take the very serious step of banning someone within the magic community it must be for a "serious offence" and not a "personal difference".

I've only recently discovered that I've been banned from the 'Australian Society of Magicians'. Not just from their club meetings, but from any event they are even affiliated with:

"You are therefore banned from attending any event run by the club, at the club premises or otherwise, sponsored by the club, or affiliated with the club in any way.  This decision is final and no correspondence will be entered into regarding it.  Should you attempt to enter any such event the relevant authorities will be called to remove you."

That means, if the ASM sponsored a magic exhibit at the Melbourne Museum (as they did earlier this year) and I went to see it, they'd call security, or maybe the police, to have me removed!

I know you must be thinking "Tim must have done something pretty bad to deserve that!"

President Nick Morton emailed me explaining why he felt the need to ban me:

"Given your previous dealings with the club, your previous history with individual members and your unsuccessful attempts to join the ASM, the committee does not feel it would be meeting it's primary duties of care as mentioned above by allowing you access to the club."

As far as I'm aware, my previous dealings with the club have been fine. I've attended on and off since the late 1970s and have helped promote the club, involved them in 'Magic Week', performed and lectured for them, been a guest artist at their one-day convention, contributed to their magazine, etc.

My previous history with individual members - this would fall under the "personal differences" category - five people in the club of over one hundred, don't like me. I have no issue with them. Though I'm not thrilled that some spread fairly nasty rumours about me when I applied for club membership, and one tried to attack me at the Losander lecture (though I was unaware of it at the time, president at the time Charles Gauci said later "On Tuesday night a member who has had a dispute with him was going to physically throw him out. I stopped him from doing this as I believed it was inappropriate behaviour.") The issue seems to be that, though I can be in the same room as them with no problems, they can't stand to be in the same room as me. I've attempted dispute resolution with them, but they want no part of it.

Finally, my unsuccessful attempts to join the club... Why should that result in a ban? Twice, respected ASM members (one was President at the time), asked me to join the club and sponsored me. This was followed by rumours and campaigns against me by the five members who don't like me. The first time I simply withdrew my application to join because of the hate campaign, the second time both Sue-Anne and I were rejected because a past president had changed the club constitution so that any application could be rejected if five members objected in writing. (Objectors remained anonymous, reasons were irrelevant).

(Most ASM members are unaware Sue-Anne and I were rejected as members, and almost all are unaware we have been banned by their committee.)

So Derek, having been the victim of being banned for "personal reasons" I applaud you for taking a stand and making sure no-one is treated like that at your conventions.

As for the ASM, I still consider it to be one of the best magic clubs in Australia and I really hope it can overcome the "hiccup" it's been suffering from for the last few years and get back on track.

With the story of Blackpool being upset because Paul Daniels referred to the place as being "rough, tasteless, bawdy and scruffy" in the Genii Forum being repeated over and over in the press over the last month, a new story has finally surfaced.

On the subject of bans -

"Lever also hit back at criticisms levelled against him that he had banned people from attending Blackpool Magicians’ Club’s annual convention and that, because he is behind the UK’s hosting of FISM, these people might not now be allowed to attend FISM in 2012.

He admitted that a “small number” of people had been banned from attending the club’s annual convention, but said he was not aware of anyone being banned from FISM."

Well in the follow-up story which came out yesterday, it seems there is at least one person banned from FISM 2012. It begins saying "Magicians in Blackpool have banned Paul Daniels from events in the resort" and goes on to say "including the 2012 event".

To make sure we're in no doubt about the situation, there is a picture of Derek Lever hitting a photo of Paul Daniels in the head with a hammer. 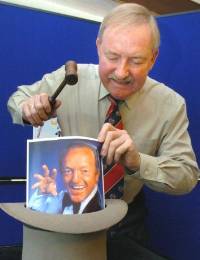 As you know, being a victim of banning myself, I'm not overly impressed by these antics and the fact that no-one from FISM or Blackpool is making any official statement about it seems to give the impression that they are quite happy with the way things are playing out in the media.

NOTE: In 1988 Paul Daniels was given 'The Murray Award' at the Blackpool Convention. This award is given to "honour the recipient for outstanding service to the Blackpool Magicians Club and for distinguished dedication to the art of magic".

If you'd like to see Paul Daniels at a convention, may I recommend the 2010 New Zealand Magic Convention where he'll be appearing with Whit Haydn, John Carney & Darren Carr.

Apparently Episode 3 is out there too. Haven't found it yet but I'd love to find out what happens next!


Blackpool 2012 must already be the most talked about, and anticipated, FISM of all time thanks to their extensive use of the internet.

UPDATE - OCTOBER 6 - This video has disappeared from Imageshack, as it did from YouTube - but it can still be viewed here now http://www.ajaxjones.com/video/fism2.mp4

Back in March Tom Ogden passed on this clip of Hitler discussing his thoughts on Criss Angel.

Now it seems he's just as unhappy about FISM 2012.

You can here a radio story here. Some good PR for a change.

(Listen on after the interview to hear how disappointed they were about Derren Brown's lottery!)

Then visit this BBC link