So what DOES it take to win a GOT TALENT show?

In Britain, after magician Jamie Raven came second to a performing dog last year, another magician has just taken out the top prize. Last week 25 year old amateur magician Richard Jones won with more than a touch of controversy.

The Magic Circle, Britain’s world-famous club of professional magicians, tweeted to say it was proud to see a member finally taking the £250,000 prize.

But others are not so happy. Some are saying Richard performed exactly the same effects that American magicians performed on America's Got Talent in 2015 and 2014. Someone has even created a video so that viewers can judge for themselves.

For his grand final performance, Richard performed a story deck effect and a card painting effect together.

It's not only magicians who noticed that Richard was performing effects that had already been done on the franchise, the media in Britain picked up on it too with headlines like BGT'S RICHARD JONES ACCUSED OF STEALING WINNING TRICK FROM AMERICA'S GOT TALENT CHAMPION.

So... did Richard choose his repertoire based on what worked on the show in America... or did the producers suggest what effects he should do?

Is this the real secret of winning the competition?

Over on AMERICA'S GOT TALENT they just featured one of THE best acts in the world today - Thommy Ten & Amelie - The Clairvoyants. If there is ANY justice in the world they will take out the top prize with absolute ease. Take a look, their act is truly astonishing.

The lunatics are still running The Asylum

It's been a while since I checked the website of THE ASYLUM - those producers of low budget knock offs of popular movies (the film world's version of Magic Makers).

They haven't missed a trick...

When James Cameron re-released TITANIC in 3D, they decided to cash in on the millions he spent on PR by releasing their new movie TITANIC 2.

When THOR came out, Asylum brought out ALMIGHTY THOR (with wrestler Kevin Nash?!)

If only they would stop riding on the coat tails of other people's success and just stick to making the movies they make best... like MEGASHARK vs CROCOSAURUS

Anyway, enough of this rant, time to watch a quality Hollywood movie just starting on TV... 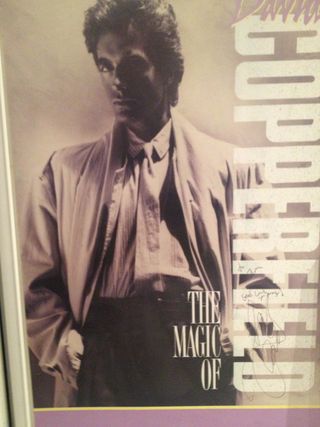 I have two walls in my downstairs office covered in odd bits of memorobilia. Visitors will often spend quite a bit of time just checking out of all odd photos and posters but I realised that most of you will never see these strange frozen moments of magic history so I thought it might be fun to share a few with you here.

The photo above is an original, signed David Copperfield poster dating back to the early 80's.

I really have no recollection how I ended up with it, but it is definitely made out to me. What makes it special is (so I'm told) David signed his whole name. Apparently he only did that during the early part of his career and now, due to demand, he signs with a quick 'DC' type scrawl... so I feel very lucky to have this.

It's also a reminder of what many say was the "golden time" of his career. The early TV specials with the romantic vignettes, the routines that blended close up and grand illusions thanks to cameras, and slightly geeky more approachable DC.

Here's a clip from those days of David doing a more traditional illusion presentation.

But boy, does he do it well.

The MMF12 on KidsWB

Earlier this year we staged the 2012 Melbourne Magic Festival. In addition to the 125+ performances spread over two weeks at the Northcote Town Hall, we had our good friends at KidsWB join us and shoot an entire episode right in the heart of "magic central".

For those who missed it, we've finally been able to get a copy of all the magic segments and post them online.

Big thanks to all the magicians both on screen and off screen, hostens Lauren and Andrew, the team at the Northcote Town Hall, the KidsWB film crew and, of course, producer Robert Mond who pulled it all together even though he was overseas at the time and missed out!

In a country where magic shows on TV are usually the "kiss of death" (Criss Angel lastest 3 episodes on Sunday night prime time, Derren Brown survived 2 at 10.30pm on Channel Nine) Penn & Teller: Fool Us has done surprisingly well late night, Saturday night on the ABC. Almost everyone I meet while performing has watched it. Even my parents sit up late to watch it!

So why is it that this show has managed to capture the attention of a nation uninterested in most things magical?

Penn & Teller are reknowned for treating their audiences as adults. They don't talk down to them, they don't pretend the magic is "real", they acknowledge that the main purpose of magic is to fool people and this show celebrates this.

After all, what do most people say when they watch Criss Angel, Derren Brown or David Copperfield: "That was so entertaining?" or "How did he do that?"

So, Penn & Teller are saying to the audience, "It's a puzzle. Can you figure out how they did it?"

Does this puzzle approach damage the art of magic?

I don't think so.

I think that Penn & Teller are simply acknowledging the 'elephant in the room' and celebrating it. As a result, they are giving the opportunity for dozens of magicians to get international TV exposure they otherwise wouldn't get.

Think about it. Take out the 'Fool Us' angle and watch that same show as a straight magic show, and suddenly it loses a huge amount of appeal. The "Will they fool Penn & Teller and go to Vegas?" and "Will I be able to figure it out" is the hook that gives the show a purpose for existing.

It is a little sad though, because as most magicians know, magic should never be presented as just a puzzle - but the majority of the magicians on the show (who are doing their regular acts) are doing nothing more than that. They are simply showing off. They are trying to fool us.

There are so few magicians who understand this principle.

Sure, you can do your magic and have everyone laughing hysterically, gasping in amazement, and giving you a standing ovation at the end of the show. But unless you can come up with a purpose for doing each routine you're still in the category of a "show off".

There's nothing wrong with that, it just depends on where you see yourself heading in your future: one of many competitors on another magician's TV show, or the magician whose name is in the title of the show?

Tim Ellis on the latest episode of SCOPE

A segment on deception I shot earlier this year for the kids science show SCOPE is airing on Channel Ten this Saturday morning.

Or you can go to this website here to watch it online.

If you missed it on TV, the entire series is now up on VIMEO.