Keith Johnstone. the internationally recognized authority on improvisation, will be teaching a series of workshops proudly presented by Impro Melbourne in May.  Keith is the creator of Theatresports™ and a prolific writer on improvisational theatre.  His books ‘Impro’ and ‘Impro For Storytellers’ have elevated improvisation to an art form in its own right.  Both books have been translated into many languages.

Keith's fearless, playful approach to improvisational theatre has given birth to a global improvisational community, and his visionary ideas have influenced such television hits as 'Kids in the Hall' and 'Whose Line Is It Anyway?' There's a long list of artists who have directly benefited from Keith's irreverent view of theatre and his ability to release creativity. Johnstone is a cheeky renaissance man with a gleeful sense of humour. He is a passionate genius inspired by his desire to unleash powerful art. His rebellious creative streak makes him break all the rules in everything he does: as a writer, playwright, painter, director, impro coach and drama professor. Working with Keith is an experience not to be missed.

If you'd like to be a part of Impro Melbourne's workshops in May, email Patti Stiles at pstiles@netspace.net.au 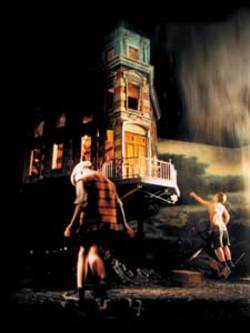 We just got back from the preview of An Inspector Calls and it was brilliant! I'd heard a lot about this play from it's previous seasons here in Australia and it certainly didn't disappoint.

Touted as "Britain's most powerful play in living memory" this production certainly fills the bill. Playing in Melbourne through February with the entire British company (who do a superb job by the way) I can only echo the sentiments of the Daily Telegraph who said "Outstanding. A genuinely great production, enthralling and visually stunning".

The play itself, written by J B Priestly, is masterful. Filled with twists, turns, intrigue and drama. It's an epic piece on the human condition; actions and consequences and how we deal with them. Just to sit and watch a reading of this play alone would be an evening well spent. However, this production, directed by Stephen Daldry, offers so much more.

The acting and direction are right on the mark, but it's the staging that nearly steals the show. You might have heard a little about 'the house', but anything I say will spoil the surprises it has in store for you, suffice to say it is as much a character in the telling of the story as any one of the actors.

Some describe this show as "a play on the scale of a musical" and, though accurate, that still doesn't do the show justice. The fact that, at almost 2 hours with no interval, this show had the entire audience thoroughly engaged from start to finish really says it all.

If you're in Melbourne and have never seen the show before, race out and get yourself a ticket, you'll love it!