When magic & the WWE collide

Announcers Jim Ross & Jerry Lawler were discussing Halloween costumes and Lawler said he was going to dress as "the perverted magician David Copafeel".

Doesn't take long for a reputation to be ruined does it...?

For those hoping that somehow Chris Benoit was "set up" and didn't really murder his wife and child or kill himself, as more facts are being uncovered that scenario is looking less and less like a possibility.

In an article HERE in the Boston Herald, a neighbour tells how she "had spoken to Benoit sometime on Saturday and he told her his wife and son were sick with food poisoning.

“He told her this big, long story about how sick they were,” Regan said. “At the time she was thinking that it was way too much information.”
Police believe that Benoit killed his wife on Friday, June 22, strangled his son on the 23rd and then committed suicide on 24th. The bodies were discovered in the afternoon of June 25."

A large portion of the media is concentrating on the 'steroid abuse' angle of this story (which would be good if it forces the WWE to get serious about eliminating drug use in wrestling) but an article HERE in the Atlanta Journal-Constitution suggests the problem stemmed more from "control issues" Benoit had in his home.

A very different look at Chris Benoit here in the Toronto Sun by trainer Bruce Hart.

With all the media outlets buzzing with news about the Chris Benoit tragedy, wrestling fans around the world are still in shock. One of the greatest wrestlers of all time, one of wrestling's "good guys", has apparently strangled his wife on Friday, smothered his 7 year old son the next day, and then hanged himself on Sunday morning.

That Chris Benoit could do this is, to most wrestling fans, beyond belief.

To some extent, I'm sure that fans are hoping that investigations will reveal that there was a third-party, a home invader or criminal of some kind, who did the killing and framed Benoit. The fact that his wife's hands and feet were bound supports this theory... Give us anything, to make things appear "right" in the world again.

But the only revelations we're getting point more and more towards the fact that Benoit, like all of us, had a dark side. A side that he seemed to do a good job of hiding from most people.

Benoit's wife of three years filed for divorce and an order of protection in May 2003. In the divorce petition, Nancy Benoit alleged that Chris Benoit, "lost his temper and threatened to strike the petitioner and cause extensive damage to the home and personal belongings of the parties, including furniture and furnishings. Petitioner is in reasonable fear for petitioner's own safety and that of the minor child." A judge issued a restraining order against Benoit and barred him from entering the family home. Nancy Benoit asked the court to dismiss the petition in August of that year. The couple later reconciled.

Like all wrestlers, he was under constant pressure from the WWE to perform. Though the WWE has introduced a "zero tolerance policy" on steroids since the death of Eddie Guerrero, (and Benoit tested negative to steroids when last tested in April) we're told that coming down off steroids can produce "hallucinations" and "murderous rage".

The latest news is that Benoit's son had 'Fragile X Syndrome' and his parents were trying to treat him while keeping his condition out of the media.

One media source reportedly was told by "a friend of the Benoit family" that "Benoit accidentally killed his wife in a domestic argument, then panicked and killed his son later so his son could be with his mother rather than grow up without a mom and knowing his father as a murderer."

So many theories, so many revelations. 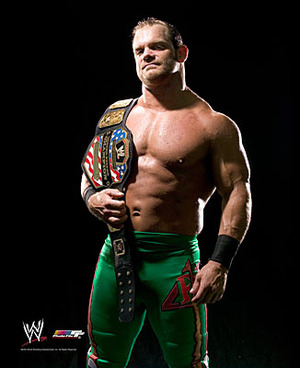 Wrestling fans will enjoy this. I just finished reading Chyna's autobiography (I picked it up in a bookstore's 'bargain bin' in Canberra last weekend). 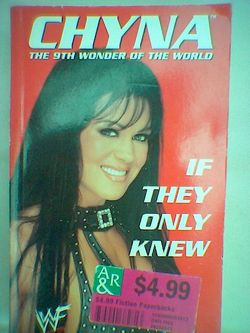 You'll note, if you look carefully on the $4.95 price sticker, that the bookstore has classified it in the 'fiction' category...

I just finished watching 'Unforgiven', a WWE pay-per-view, and though a lot of the matches featured some exceptional wrestling exchanges (and some amazing stunts) a lot of the action was less than engrossing. It wasn't until the skill was combined with good storytelling that it really started to suck me in. It's one thing to have two guys going head to head exchanging some blows, but you know it's all planned so it takes a little of the excitement away. However, when the two start to tell a story between them and give some real emotional motivation to the moves, it makes it much easier for the viewers to suspend their disbelief and forget that they're watching a scripted show, they can get emotionally involved.

Magic is just the same. How many times do we see incredibly skilled magicians performing and we just don't care. Sure, it's easier to create drama between two adversaries in the squared circle, but surely conflict and emotion can be conjured up by a magician who also puts some thought into his or her presentation as well.

With the WWE, I'm impressed by some of the moves they pull off, but if two men are in the ring fighting I want to know why. Is it for a championship? Is there a feud going on? Has one just stolen the other's girlfriend? These are story elements that cause the viewer to get emotionally involved in the match. It transforms the match for a display of skill into a piece of theatre.

When magicians finally realise just how crucial this is to their art form too, maybe we'll see magic move up a rung on the showbiz ladder. The more we respect our audiences, the more they're going to respect our magic. 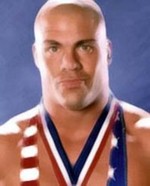 In a huge shock for wrestling fans the WWE has released Kurt Angle! They assure us that this is "no angle" but he is being released "due to personal issues".

I think I speak for all wrestling fans when I say I think I'll be giving RAW a miss for a while... at least until after the next PPV. The writers have come up with angles which are both deliberately offensive (Vince McMahon challenging God to a match. As one wrestling commentator said: "Deuteronomy 6:16") and totally pathetic (Kane and his voices) that it's going to be a bit embarrassing to admit you're a fan for the next few weeks.

I mean come on... we can suspend the disbelief when the camera catches people plotting backstage and 1: The people quite happily discuss their plots apparently oblivious to the fact that the camera is broadcasting their secret plan, 2: The people they then attack somehow weren't watching the show when the plans were discussed on TV. We fans let the WWE get away with that for the sake of a fun storyline. But on this week's RAW the camera catches Kane in a private moment and we can actually hear what he's THINKING! Yes, somehow we have to believe that the WWE has mics that are so good they can now pick up people's thoughts!

Well, the WWE doesn't need a magic microphone to know what the majority of the fans think of this angle. Just check the ratings.